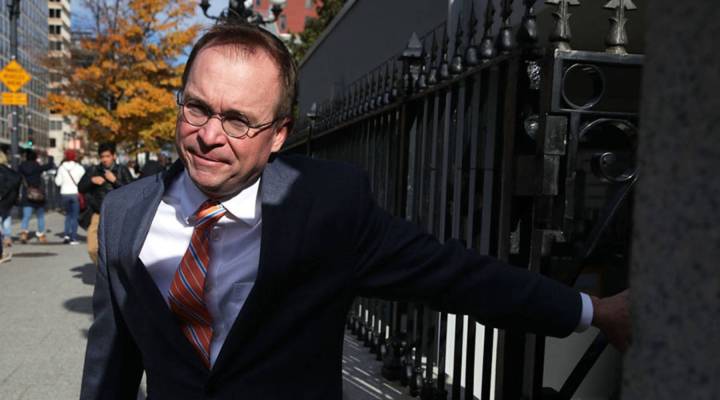 COPY
Mick Mulvaney, President Donald Trump's pick for acting director of the Consumer Financial Protection Bureau, walks back to the White House from the CFPB building after he showed up for his first day of work on November 27, 2017 in Washington, D.C. Alex Wong/Getty Images

Mick Mulvaney, President Donald Trump's pick for acting director of the Consumer Financial Protection Bureau, walks back to the White House from the CFPB building after he showed up for his first day of work on November 27, 2017 in Washington, D.C. Alex Wong/Getty Images
Listen Now

Mick Mulvaney, the director of the Office of Management and Budget and the acting director of the Consumer Financial Protection Bureau, sent an unusual letter to Fed Chair Janet Yellen yesterday. The CFPB gets its funding from the Federal Reserve like other government bureaus, so each quarter it requests money to keep the bureau going. However, this time no money was requested for the second quarter of this fiscal year.

The Consumer Financial Protection Bureau was created under the Dodd-Frank financial reform law in the wake of the financial crisis. It is tasked with protecting consumers’ interests from financial institutions, but critics, including the president, think it is bad for business.

Mulvaney’s letter doesn’t come as a total surprise, given the Trump administration’s antagonistic approach to the CFPB. Mulvaney has previously called the CFPB a “sick, sad joke,” and his appointment to the CFPB by President Donald Trump led the bureau’s then-acting director to file a restraining order in an attempt to prevent Mulvaney from assuming the top job.

Mulvaney said that the money he’s not requesting — about $145 million — will go back to the Treasury to help reduce the federal deficit. You can read the letter in full here. We called two analysts today for their take on Mulvaney’s letter. Below is an edited transcript of their comments.

Mulvaney: “The Bureau is requesting $0.”

Diane Katz, senior fellow at the Heritage Foundation: What’s the problem? I mean, from my understanding, the agency has money on hand as budgeted for the quarter. They also have the opportunity to go to Congress to ask for up to $2 million. You know, if they don’t need the money, I don’t see any reason that they should receive it.

Debbie Goldstein, executive vice president at the Center for Responsible Lending: So I think this is shocking and disappointing but maybe not surprising…. However, what the CFPB’s intent was was to set up a reasonable cushion for reserves for unexpected expenses, just like any of us might do to make sure we have enough for our expenses. In the CFPB’s case, that cushion is to make sure it has enough funds to pay its personnel but also for important things like the Consumer Complaint Database, handling direct contact from consumers, who the CFPB is supposed to help, and for important enforcement actions.

Mulvaney: “Simply put, I have been assured that the funds currently in the Bureau Fund are sufficient for the Bureau to carry out its statutory mandates for the next fiscal quarter while striving to be efficient, effective, and accountable.”

Diane Katz: Well, I think we should do away with it altogether. But aside from that, you know, the bureau has no direct accountability to Congress … because Congress doesn’t appropriate funds to the bureau. And so the power of the purse is absent.

Debbie Goldstein: In response to how asking for money from Congress is a problem for the bureau’s mission: And the reason for that is to make sure that the CFPB stays independent and that members of Congress can’t use political efforts through appropriations to control its actions.”

Mulvaney: “While this approximately $145 million may not make much of a dent in the deficit, the men and women at the Bureau are proud to do their part to be responsible stewards of taxpayer dollars.”

Diane Katz: I’m not troubled that Mr. Mulvaney is not seeking more funds, because the bureau doesn’t need it. They’ve got the funds on hand that they need to operate. The main issue is that there’s finally some accountability being visited on this bureau.
Debbie Goldstein: I certainly understand the desire to protect taxpayer dollars, but I think the mission of the CFPB is to protect the taxpayers, the American people, from lenders who target them for high-cost and unaffordable loans. And the best way to save Americans millions of dollars is by preventing predatory lending, not by draining the CFPB’s resources.