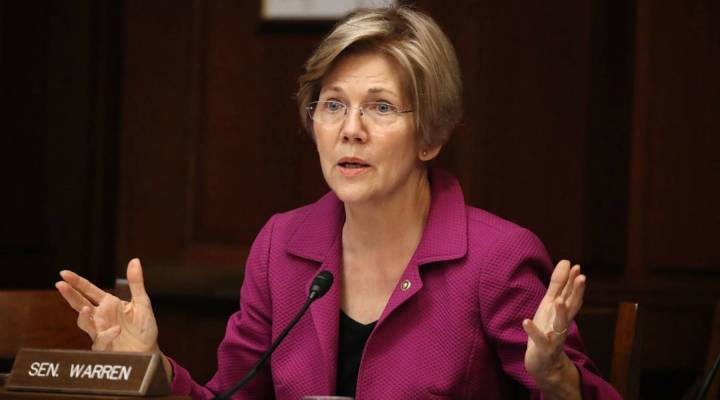 Despite a challenge in federal court to his legal authority, President Trump’s choice to head the Consumer Financial Protection Bureau has now instituted a freeze on hiring and new rulemaking at the watchdog agency.

Trump put in Mick Mulvaney, the director of the Office of Management and Budget, as the boss. But outgoing director Richard Cordray had appointed Leandra English to that position, which prompted her to file a lawsuit in order to prevent Mulvaney from taking over the CFPB.

Massachusetts Sen. Elizabeth Warren, a Democrat who helped set up the agency, joined us to discuss the confusion over its leadership. Below is an edited transcript of the conversation.

David Brancaccio: Why are you fighting the president so hard on this? It’s just an interim appointment. This U.S. Senate would still confirm the permanent position anyway.

Sen. Elizabeth Warren: That’s true, but this is about following the law. Dodd-Frank created the Consumer Financial Protection Bureau, and the law that Congress put in place specifically says the deputy director takes over when the director is absent or unavailable. So if we’re going to have a deputy director who’s going to take over on an interim basis, it ought to be done according to the law. There’s no vacancy here for Donald Trump to fill.

Brancaccio: Is there a scenario, Senator, where the CFB doesn’t get a permanent director for a long time, so therefore Mick Mulvaney sitting in the chair could have a profound effect?

Warren: It is possible it could take a long time to get a permanent director in place. And that’s all the more reason that the law needs to be followed. And look, it’s important that this agency be run by somebody who’s out there trying to help it fulfill its mission. The person that Richard Cordray has named as the as the deputy director is someone who’s a skilled civil servant. She’s worked in multiple government agencies in operational roles, and she’ll continue the work of the agency until a new director is nominated by the president and confirmed by the Senate. This is just about following the law.

Brancaccio: The president of the United States says the bureau has been a total disaster. He said, “Financial institutions have been devastated and unable to properly serve the public.” You know, the CFPB damaging the ability of financial services companies to, for instance, lend money is what I assume he was talking about. You don’t see it as a disaster?

Warren: Well, actually what the agency has done has made it a lot harder for giant financial institutions to cheat their customers. In fact, since the agency’s been up and running over the past half-dozen years, it’s forced the largest financial institutions in this country to return about $12 billion directly to consumers they cheated. It’s handled about 1.2 million complaints against student loan outfits, against the big banks, against different kinds of lenders, and that’s a reason that a lot of these big banks really don’t like it. And President Trump is right — this agency has made it harder for the big banks to cheat consumers. And that’s exactly why we need this agency that just gets out there every day and does its job trying to level the playing field and trying to reduce the number of families who get cheated.

Warren: Well, he may be implying that, but he needs to come up with some evidence of it because there’s sure no evidence of it right now. Well, you know, let’s face it, these giant banks are wallowing in profits. They’re doing just fine, thank you very much. And they’ve also shown they’re still willing to boost their profits by cheating people. Remember Wells Fargo opening all those fake accounts? That’s just the latest, greatest example of what they’ve been up to. And the idea that somehow American families are going to be better off if the cop is pulled off the beat, if the consumer agency is not there to investigate the next Wells Fargo-style scam, is just wrong.

Brancaccio: The agency here that you helped create is being deeply affected by this leadership struggle at the top. The president’s man is over there now. Do you feel that you blew it and left too much wiggle room regarding the president’s power to appoint an interim boss?

Warren: Gosh, you need to talk to Barney Frank about this who really did the drafting, but Barney has been pretty clear on this. He doesn’t think that we left any wiggle room at all, and that the Dodd-Frank law specifically says that when the director is unavailable, the deputy director becomes the acting director. It happens automatically by operation of law. It happens because of the way Congress wrote the laws. In other words, there was never a moment of vacancy here. We went from Rich Cordray being the director to Leandra English being the director. And that’s simply the way Congress wrote that law. And for the president to come in and say, “I can disrupt all that, I can rewrite the laws the way I want to see them,” is just … it’s not there. He has no authority to do this. He’s created a cloud over the agency, and now the only way that can be resolved is go to court. And let’s see what the courts say about it, and sort out the president’s claim that somehow he can override the specific language of Dodd-Frank.