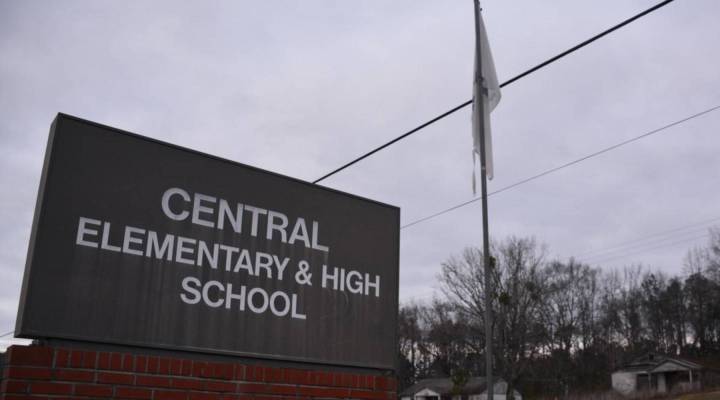 On a recent Saturday afternoon, the Central High School gym in the small, rural community of Talbotton, Georgia was packed.

The Hawks boys basketball team was in the playoffs. Talbot County schools Assistant Superintendent Cynthia Epps said it was kind of a big deal for this community, with a population of about a thousand people. “Basketball games tends to be a gathering … basketball games and churches,” she said.

In rural communities across the country like Talbotton, there aren’t many options beyond public schools. And while Secretary of Education Betsy DeVos is a strong believer in school choice, some people in those communities say expanding school choice programs can put rural schools at risk of losing funding.

Epps said the public school system is a vital part of this community. It’s one of the largest employers in Talbot County, where one-quarter of the population lives in poverty. And there are no private or charter schools in the district, so it’s the primary education option for most students, many of whom are African-American.

“It’s a gateway to getting better,” Epps said. “It’s certainly a gateway here for families and children to be better.”

But the district ranks among the worst in the state when it comes to student achievement.

That’s led parents like Sher’Londa Walker to look for other options. She sits on the Talbot County commission — it’s independent of the school board. For years, Walker schlepped her kids to public schools with better academic rankings about 20 miles away in a neighboring county.

“It was hectic, but it was worth it,” she said. “I never complained because I was doing what was best for my kids.”

State education money followed each of Walker’s kids to that other district. Eventually, she brought her kids — and that money — home to Central High, and said she’s happy to have them here. Georgia pays at least $2,400 for each high school student enrolled in a district, but will pay as much as $14,000 for those who need special services.

Walker’s story is unusual in rural Talbotton. Most parents here don’t have the means to get their kids into public or private schools in neighboring districts.

“It is certainly my hope that where there are needs for students to be met, these parents are afforded more opportunities, more choices so that their children can be in a school that fits their family’s needs,” he said.

Teasley’s trying to increase school choice by expanding a program that gives up to $2,500 in tax credits to couples who donate to private school scholarship funds. The proposal would increase the cap on those donations to $100 million a year from the state budget to help thousands of students go to private schools. The National Council of State Legislatures says 27 states have some kind of private school choice program on the books.

In Georgia, the idea is to divert money from the state budget, which helps pay for public schools, to make private schools more affordable.

“Choice sounds like a wonderful thing except when it unfairly disadvantages a particular group or set of people,” said Doris Williams, who studies education for the Rural School and Community Trust.

“And it might not be based on race,” he said. “It might be based on socio-economics where it gets back to just poor folks having less and rich folk getting more.”

But Catrett’s working to keep that from happening. That starts by getting people to see his small, struggling rural district like he does: as a good school choice.