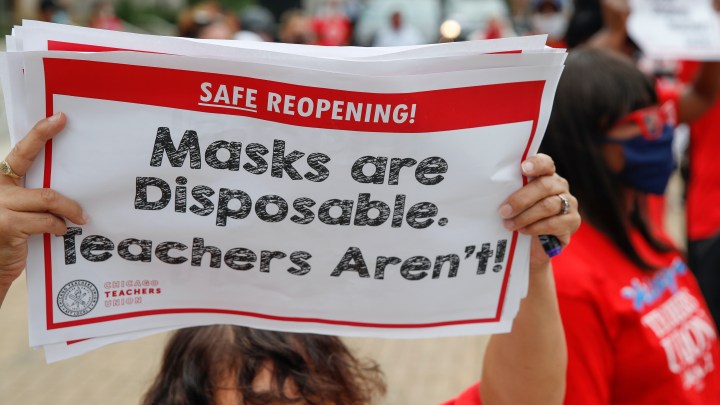 COPY
A big part of reopening schools is making sure everyone involved feels safe. Accomplishing this requires funding. Kamil Krzaczynski/AFP via Getty Images

It looks like the Senate is poised to take up the $1.9 trillion COVID-19 relief package as soon as Wednesday.

The bill would allocate a $130 billion to K-12 schools in an effort to get them open as quickly as possible and in line with guidelines from the Centers for Disease Control and Prevention.

That’s going to require a lot of schools to spend money improving their infrastructure.

Part of reopening more schools is figuring out how to make teachers, students and parents feel safe.

“So what needs to be done?” said Megan Fasules, a research economist at Georgetown University’s Center on Education and the Workforce. “Possibly changing the ventilation? Maybe bringing in portable buildings so that you have fewer students in each classroom?”

Sujith Cherukumilli, an analyst at the Southern Education Foundation, points to a Government Accountability Office report from last year “which found an estimated 41% of school districts in the country need to update or replace HVAC systems in at least half of their schools. And so that represents about 36,000 schools nationwide that need HVAC updates.”

And the schools with those problems tend to be located in low-income school districts.

This version of the relief bill, the American Rescue Plan, would also allow schools to upgrade their digital infrastructure.

“We are now very widely recognizing that access to devices, access to the internet, as well as training on how to use these devices is critically important to education,” said Laura Jimenez, director of standards and accountability at the Center for American Progress.

That’s especially true for low-income and rural students who, because of the digital divide, have had a harder time with remote learning during the pandemic.