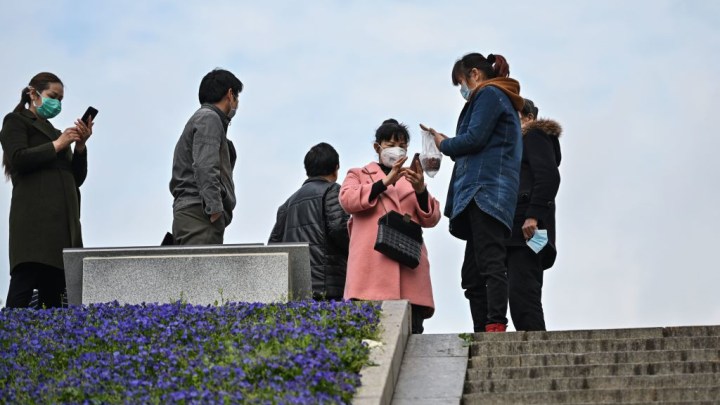 David Brancaccio, Jennifer Pak, and Alex Schroeder May 6, 2020
Heard on:

COPY
Businesses are being held responsible for screening virus carriers. If an outbreak happens, they could get shut down. Hector Retamal/AFP via Getty Images
COVID-19

David Brancaccio, Jennifer Pak, and Alex Schroeder May 6, 2020
Heard on:

Businesses are being held responsible for screening virus carriers. If an outbreak happens, they could get shut down. Hector Retamal/AFP via Getty Images
Listen Now

China is just coming off a five-day spring holiday, officially extended a year ago in the hope a longer break would spur tourism.

But the calculation is already in: Tourism revenue in China was down 60%, to only $6.8 billion, during this Labor holiday.

Some are definitely still afraid to travel given the COVID-19 outbreak, but it’s also that there are still many virus prevention measures that deter people from traveling.

Before you travel on vacation, you’re going to have to answer a couple of questions. Will it affect your child’s schooling? Some schools, for example, require students to self-quarantine if they leave the city, like in southwestern China’s Kunming city.

Another question is, is it going to affect your work?

China has also shut its borders to outsiders. “So, if I leave now, I’m not going to be allowed back into the country, even though I have a valid work visa,” Pak said.

For China’s tourism and hospitality industries, it’s going to be a struggle. Businesses are held responsible for screening virus carriers, and if an outbreak happens, they could get shut down. So business owners are being extra cautious.

Right now there’s a narrative in the Chinese press that most of the COVID-19 cases are imported.

“Even though a lot of those are Chinese nationals returning from abroad, in practice, it means foreigners like myself are being treated like a business liability,” Pak said. “So I couldn’t book, recently, a seat on a budget carrier, and some hotels won’t take foreigners.”

One hotel owner in the southwestern Yunnan province said that he expects his business might return to only 50% of what it used to be by summertime.