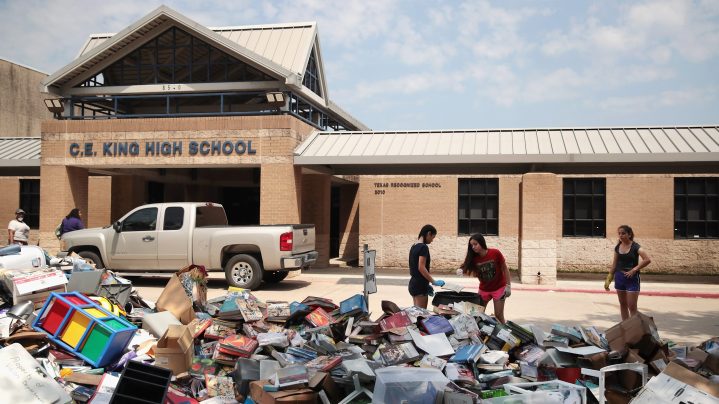 COPY
Needing to rebuild and re-purchase supplies after a flood can be very expensive for schools and their communities, said Matt Casale with the Public Interest Research Group. Above, volunteers clean a school in Houston after flooding from Hurricane Harvey in 2017.  Scott Olson/Getty Images
A Warmer World

Needing to rebuild and re-purchase supplies after a flood can be very expensive for schools and their communities, said Matt Casale with the Public Interest Research Group. Above, volunteers clean a school in Houston after flooding from Hurricane Harvey in 2017.  Scott Olson/Getty Images
Listen Now

As you likely know, it’s really hot in a lot of places right now. In the United Kingdom, people are bracing for some of the hottest temperatures they’ve experienced ever. Dangerous levels of heat are expected in parts of the United States as well. And as we move through summer, schools around the country are preparing to deal with these effects of climate change.

High temperatures, yes, and also flooding. Thousands of American schools are located in areas subject to flooding, according to a 2017 study by The Pew Charitable Trusts. And when they are flooded, it can cost millions to rebuild and puts schools in competition with other parts of the community for safer land.

School had been in session only a few weeks when intense rain hit on a Saturday last August in Humphreys County, a rural area Tennessee.

Kristi Brown, who works for the school system, said it was like a tsunami.

“I think the official number was right around 21 inches of rain in a matter of several hours,” she said. “Basically there was just nowhere for that water to go.”

So the water flooded buildings, including an elementary school and a junior high school, which were destroyed.

Brown said more than 20 people died in the flooding, including three students. And if it had happened during the school week, more lives would have been lost. So now they’re planning to rebuild, but they don’t want to do it in a floodplain.

“The biggest challenges for us would be finding suitable spaces, because everyone here is needing those same spaces,” Brown said.

Brown said they’re retrofitting an old Acme boot factory as a temporary school. Businesses and low-income housing were also destroyed, so land not likely to flood is at a premium.

Some of the cost of rebuilding schools was covered by insurance, Brown said. And the school system is receiving money from the Federal Emergency Management Agency and the state of Tennessee.

But part of the cost will be borne by the community, too, according to Matt Casale with the Public Interest Research Group.

“Having to rebuild or repurchase all kinds of supplies after a flood is really impactful and would set a school back,” he said.

As schools rebuild, there is an opportunity to get ahead of future natural disasters by using solar panels and microgrids to provide power, said Laura Schifter with the Aspen Institute

Many communities have a school, Schifter pointed out, so it makes sense to invest in them as hubs as the climate continues to change.