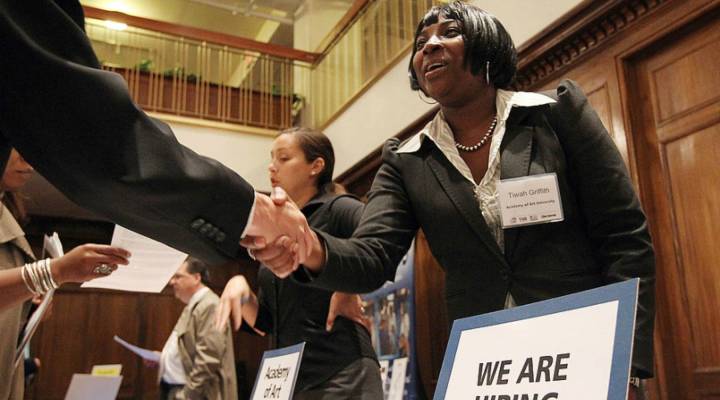 COPY
A job seeker shakes hands with a recruiter during a job fair in San Francisco, California. Justin Sullivan/Getty Images

WASHINGTON (AP) — U.S. employers added a robust 235,000 jobs in February and raised pay at a healthy pace, evidence that the economy remains on solid footing nearly eight years after the Great Recession ended.

The unemployment rate dipped to a low 4.7 percent from 4.8 percent, the Labor Department reported Friday. More people began looking for jobs, increasing the proportion of Americans working or looking for work to the highest level in nearly a year.

The strong job growth, decent pay gains and low unemployment rate make it all but certain that the Federal Reserve will raise short-term interest rates when it meets next week.

February’s job gains were boosted by 58,000 additional construction positions, the most in nearly a decade. That figure was likely enhanced by unseasonably warm weather in much of the nation.

Friday’s report was the first to cover a full month under President Donald Trump. Trump has already tweeted cheerfully about a survey of private-sector hiring released earlier this week that suggested a robust job gain in February.

An array of evidence suggests that the U.S. job market is fundamentally healthy or nearly so. The number of people seeking first-time unemployment benefits — a rough proxy for the pace of layoffs — reached a 44-year low two weeks ago.

And in January, employers added a vigorous 227,000 jobs, according to the government’s figures, higher than last year’s monthly average of 187,000.

Business and consumer confidence has soared since the presidential election, with many business executives saying they expect faster economic growth to result from Trump’s promised tax cuts, deregulation and infrastructure spending.

The U.S. economy is also benefiting from steadier economies overseas. Growth is picking up or stabilizing in most European countries as well as in China and Japan. The 19-nation alliance that uses the euro currency expanded 1.7 percent in 2016, an improvement from years of recession and anemic growth. Germany’s unemployment rate has fallen to 3.9 percent, although in crisis-stricken Greece, unemployment remains a painful 23 percent.

In the United States, employers have been hiring solidly for so long that in some industries, they’re being compelled to raise pay. Hourly wages for the typical worker rose 3.1 percent in 2016, according to a report this week by the Economic Policy Institute. That’s much higher than the 0.3 percent average annual pay gain, adjusted for inflation, since 2007, the EPI said.

Minimum wage increases last year in 17 states and Washington, D.C., helped raise pay among the lowest-paid workers, the EPI found. Pay increases for the poorest 10 percent of workers were more than twice as high in states where the minimum wage rose as in states where it did not.

At the start of 2017, minimum wages rose again in 19 states, a trend that might have helped raise pay last month.

U.S. builders are breaking ground on more homes, and factory production has recovered from an 18-month slump, fueling growth and hiring. In February, manufacturing expanded at the fastest pace in more than two years, according to a trade group. Businesses have stepped up their purchases of industrial equipment, steel and other metals, and computers.

And in January, Americans bought homes at the fastest pace in a decade despite higher mortgage rates. That demand has spurred a 10.5 percent increase in home construction in the past 12 months.