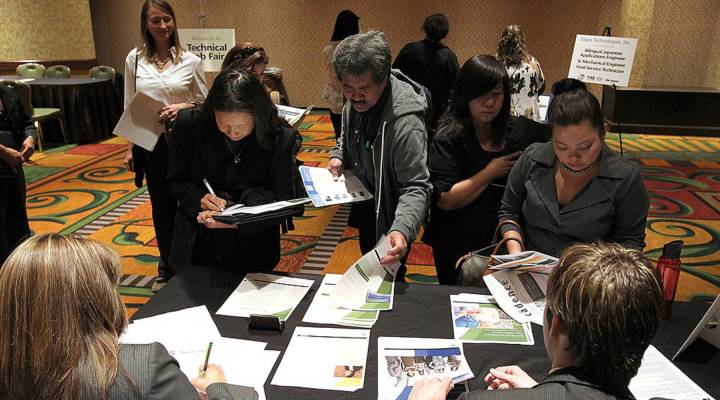 COPY
Job seekers talk with recruiters during a career fair. U.S. private payrolls picked up almost 300,000 jobs in February, which was far more than expected, according to an ADP report. More than 100,000 were in small businesses. Justin Sullivan/Getty Images

Job seekers talk with recruiters during a career fair. U.S. private payrolls picked up almost 300,000 jobs in February, which was far more than expected, according to an ADP report. More than 100,000 were in small businesses. Justin Sullivan/Getty Images
Listen Now

The private payroll processing company ADP came out with its best guess at the February jobs figures, and the company said businesses added 298,000 jobs last month. More than 100,000 of those new hires were made by small-sized businesses.

Not many, if any, economists will tell you the environment for small businesses is a bad one these days. Bill Dunkelberg, chief economist at the National Federation of Independent Business, certainly won’t. He said this is the most optimistic he’s seen firms he’s in touch with in more than 40 years.

“These numbers are really good, and we’re hoping that they translate into hiring and spending and all those good things that will make the economy grow even faster,” he said.

Why are businesses feeling so optimistic? For one, the economy was chugging along nicely before the presidential election.

Aparna Mathur, an economist at the American Enterprise Institute, said companies are betting on the Trump administration implementing at least some of the things it’s been talking about: tax cuts for businesses and relaxed regulations. But it hasn’t happened yet.

“This is going to be our biggest problem going forward,” Mark Zandi, chief economist at Moody’s Analytics said. “It’s not going to be unemployment or underemployment, it’s going to be a lack of labor.”

The U.S. Bureau of Labor Statistics will put out its jobs report this week. Economists and analysts are expecting those numbers to reinforce the optimism small businesses have been experiencing of late.