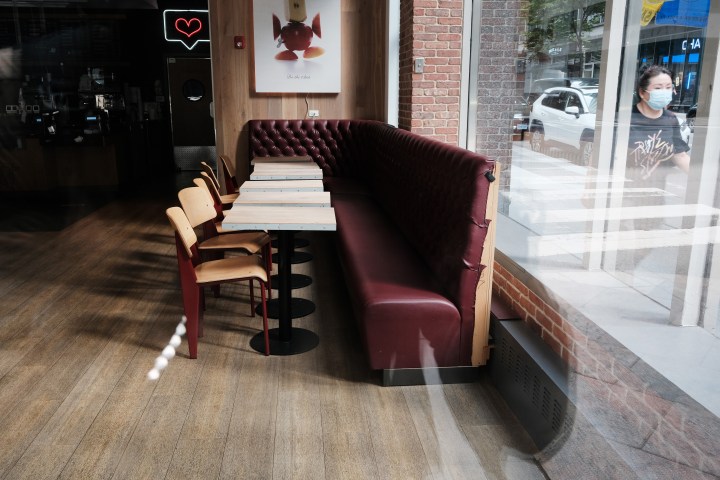 Maybe it’s because there was a fall chill in the air this morning in Los Angeles. Maybe it’s because it’s Monday, the start of another workweek … 18 months, now, into this pandemic. But the economic stories of the day are starting to feel like an endless loop of the ups and downs of the virus and its impact.

Has anyone else been feeling like life is a broken record? I’m just one consumer. But consumers’ decisions impact businesses like Takito, a trio of Latin American restaurants in Chicago owned by Mario Ponce.

“I can’t remember a more difficult time in forecasting the next quarter or two,” Ponce said.

In the last few weeks, business has fallen about 30%. He’s gone from desperately searching for workers to putting hiring on pause. Still, he’s optimistic about the future after a good summer. “People want to go out. People demonstrated that restaurants matter,” Ponce said.

Ponce just feels he’s in a holding pattern. According to Bill Dunkelberg, an economist at the National Federation of Independent Business, the economy itself is in one.

“Uncertainty is there and it’s a guessing game right now,” Dunkelberg said.

Another indicator? Impatience. Ayelet Fishbach, a professor of behavior science and marketing at the University of Chicago, said preliminary research showed impatience was back to the level it was at before the vaccine rollout.

“People’s expectations were so much more optimistic than what actually happened,” said Fishbach.

Lots of people thought we’d be done with this by now. And that affects how consumers feel and how they interact with the world.

“I think I share the frustration of ‘Oh no, not again,'” Fishbach said.