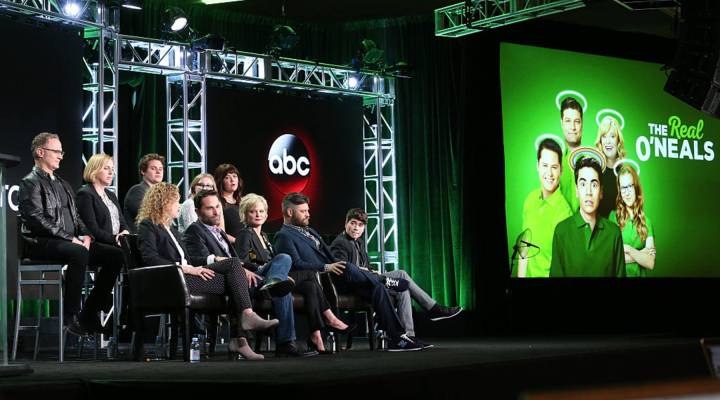 COPY
At its heart, "The Real O'Neals" is about a teenage boy coming out. Above, executive producers Todd Holland, Stacy Traub and the show's cast. Frederick M. Brown/Getty Images

At its heart, "The Real O'Neals" is about a teenage boy coming out. Above, executive producers Todd Holland, Stacy Traub and the show's cast. Frederick M. Brown/Getty Images
Listen Now

“The Real O’Neals” is, in many ways, a par-for-the-course network comedy.

The show centers on an Irish Catholic family in Chicago.

“The perfect veneer of a family crashes in a night,” said Casey Johnson, one of the show’s executive producers. “And it’s a story about the aftermath of how this family comes together.”

Toss in a few musical numbers, and you have a not-unfamiliar formula.

But, “The Real O’Neals,” which is finishing up its second season this month on ABC, is different in one big way. At its heart, it’s about a teenage boy coming out.

“It hadn’t been done before,” Johnson said. “ABC has this incredible tradition of family comedies, but they hadn’t done it about a gay teenager.”

During the first season of the show, national politics lined up with the show’s message of acceptance. Johnson said the show’s writers celebrated the Supreme Court ruling on same-sex marriage with a rainbow cake.

But during the second season, those politics have changed. The Republican party has traditionally been less friendly to the LGBTQ community. President Donald Trump recently reversed a Barack Obama policy that allowed transgender students to use the bathroom of their choice. Some Republican lawmakers are actively hostile toward gay rights.

And that shift has cast the show in a new light.

“Initially, we were scared that maybe people were going to run away from it,” said David Windsor, another executive producer on the comedy. “Personally, I feel that this show is more relevant now than ever.”

But relevance is tricky for network comedies. Especially in moments of big cultural and political change. Rewind to the 1960s. The counterculture movement. Vietnam.

He said networks were making plenty of money running shows like “Green Acres” and “The Beverly Hillbillies.” “The Mod Squad” had hippies, but the hippies were actually cops.

Over time, Bushman said, scripted prime-time comedies became more relevant, from “All in the Family” back in the 1970s to “Black-ish” today.

But, he said those same business calculations still apply.

“I’m not looking to see a full-scale assault of any kind on the Trump movement in prime-time network television. I’d be shocked if we did.”

Which brings us back to “The Real O’Neals” — how to make sense of its newfound relevance, even political relevance, and at the same time stay true to what it is: a comedy meant for everyone.

Windsor said that from the very beginning, and through today, the show wanted to create conversation. But is that a conversation ABC thinks its audience wants to keep having? We’ll know later this spring, when the network announces plans to cancel or renew the show. 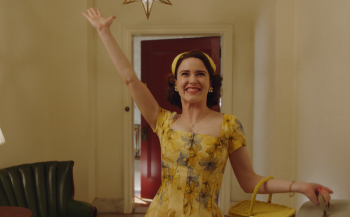