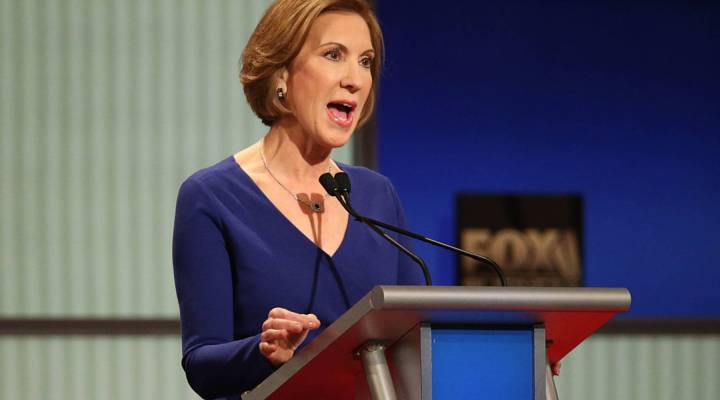 Battles over the presidential candidate debates — how many there are, the ground rules, and who is included — are a running theme of this election season.

The latest instance? A dispute between ABC and Carly Fiorina, former CEO of Hewlett Packard and Republican presidential candidate, over her exclusion from that network’s Republican debate on Saturday in New Hampshire. Fiorina does not qualify for the debate according to ABC’s criteria that a candidate must either finish in the top three in Iowa, poll in the top six in New Hampshire, or poll in the top six nationally. And unlike previous debates this cycle, there will be no undercard match for those who don’t make it to the main stage.

In an open letter to the Republican National Committee, Fiorina argues that “networks are making up these debate rules as they go along” based on what makes the “best TV.” She cites her victories in Iowa over some of the other candidates who did make the cut — and also asserts she is a more credible candidate based on the money her campaign has raised.

Marketplace Morning Report host David Brancaccio talked to Fiorina on Thursday in New Hampshire about the debate, campaign finance, and the economy. Here’s an excerpt from that interview.

Brancaccio: ABC television has to draw a line somewhere. I know it must be frustrating, but why should they bend the rules for you?

Brancaccio: In your view, what’s broken here? Why shouldn’t a private sector media company get to decide how it wants to run its TV show?

Brancaccio: I was looking at your letter to the RNC. It makes the point that you should be included in the debate in part because you’ve raised more money than some other candidates. That might suggest that wealthier donors get a pretty big role in choosing who got to be on that stage. That’s not going to sound right to some people.

Fiorina: There are load of small donors, and we’ve done a great deal of it online with small donors. The ability to raise money is a show of support. It also demonstrates viability. There are a couple people standing on that stage who aren’t viable after New Hampshire. They are not on the ballots in all the states as we are. It’s not about wealthy donors. If that were the case, then Jeb Bush would be leading because he has more wealthy donors and more money than anyone else, and he’s spent more money than anyone else.

Brancaccio: I want to take a moment here to talk to you about the economy for a second. Some economists that I talk to are not ruling out the chance that this country will be in recession by the time of election day in November. It’s not a foregone conclusion, but is this economy getting the attention that it requires in this campaign?

Fiorina: Well, it depends on who the candidate is, but certainly I give it a lot of attention. Working families’ wages have stagnated for forty years. We are destroying the job creators of this nation who actually are not big companies, but small companies and new companies and family-owned businesses. The crushing weight of government is destroying them. So whether or not we are in a recession, we cannot settle for an economy where record numbers of men are out of work and record numbers of women are living in poverty, and young people don’t think the American dream is real anymore. We can’t settle for that.

Brancaccio: It’s not just small business. I was looking at some data that we gathered; it’s often new companies that are engines for job growth. What could you do for them so they could perhaps come up with even more jobs?

Fiorina: New companies are vital. So, despite all the hoopla over Silicon Valley, most new companies get their loan, their helping hand from community banks or credit unions. They are being destroyed. We’ve now destroyed 1,591 community banks. We’ve destroyed 20 percent of the credit union industry…because of Dodd-Frank. Wall Street banks helped write that legislation to protect themselves, so now instead of 10 banks too big to fail, we have five even bigger, even more powerful, even more entrenched banks. And the little guys, the community banks and the credit union industry are being destroyed. When government is big and powerful and complicated, only the big and powerful and the wealthy and the well-connected can handle it — and that’s what’s going on.