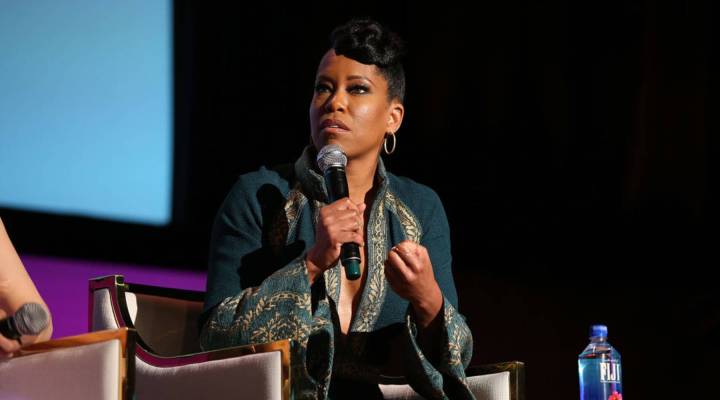 COPY
Regina King says that in a lot of ways, “I do feel like I'm just getting started.” Above, she speaks at a Netflix event in Beverly Hills, California, in May. Phillip Faraone / Stringer

Regina King says that in a lot of ways, “I do feel like I'm just getting started.” Above, she speaks at a Netflix event in Beverly Hills, California, in May. Phillip Faraone / Stringer
Listen Now

Actor-director Regina King is no stranger to the Emmy Awards. And she’s up for best lead actress in a limited series at the Emmys on Sept. 17, her fourth consecutive Emmy nomination (she’s won two). Known for her roles in “Southland” and the ABC anthology “American Crime,” King’s most recent nomination comes not from network television, but from Netflix, where she stars in Veena Sud’s drama “Seven Seconds” as Latrice Butler, a woman whose son is struck by a white police officer in a hit-and-run.

Marketplace host Kai Ryssdal spoke to King about her role and about her work behind the camera. The following is an edited transcript of their conversation.

Kai Ryssdal: I want to start, obviously, with the Emmy nomination you got for “Seven Seconds,” and the role, and our times, I guess. What did it mean to you to play this woman?

Regina King: Oh, well, first of all, Kai, I have to tell you I was, I’ve realized in hindsight that I was scared to play the role, and I felt like, you know, I’ve played a mother before several times. But Veena [Sud] was very adamant on me playing Latrice, she felt like I was the one for it.

Ryssdal: And I guess she gets to decide, right?

King: Yes, she does. It is her — she created it, it’s her piece of art. And she said that’s who she saw as Latrice. And so I took a deep breath and, you know, got into it.

Ryssdal: Do you think a show like this, or I guess a project like that, could exist on network television today?

King: Well, yeah, it’s a long “hmm.” And the reason why I don’t want to just say, “No, it can’t,” because, you know, “American Crime [Story]” was on ABC, and that was a huge leap for ABC to take. So, sure, there’s a space if the network wants to take that risk. I don’t know that all networks would allow themselves to be as gritty. You know, that’s kind of the beauty of cable and streaming anyway, it feels more closer to real life.

Ryssdal: True confession time: We originally had you scheduled to come on during pilot season ’cause you were directing a pilot about New York City cops, right? “The Finest,” isn’t that what it’s called? Didn’t get picked up for a series, and I’m sure there’s that there’s a whole set of regrets you have about that. But one of the things that occurred to us as I was getting ready for that interview was the diversity issue in pilot directing and pilot production as it’s happening in Hollywood today. And I wonder, and I mean, I’m sure you get this question all the time, right, because you’re in front of the camera, you’re behind the camera, you’re an African-American woman, and you’ve got, I mean, you’re like a made woman here, right, you’re doing stuff that counts and I guess the question is, does it feel different now?

King: Oh, in a lot of ways, Kai, I do feel like I’m just getting started. You know? And I guess because I’m in a position where I can be part of the conception. So I guess it’s a more powerful position, if you will. I’m excited about the future. While it was very disappointing that “New York’s Finest” did not get picked up, it did not deter me from developing other projects, and they have been received very well. And you hear me pausing because I try to be very careful about speaking of something too much and then you have to have the conversation, “Well, it didn’t get picked up.” You know, it’s really disappointing because all of the energy you put into it is so much more than when I’m just approaching it as an actor only. It’s a lot more brainpower.

Ryssdal: Huh. That’s interesting. Well, I mean, come on, a woman at your level, I imagine the acting part of it takes a whole lot of brainpower, too, right? I mean, prepping for “Seven Seconds” and Latrice Butler, you spend time with a woman who’s lost her son. I mean, all of that.

Ryssdal: Right, you’re on the receiving end, but it’s still probably not as hard.

King: Yeah, yeah. So you’re mourning with other people, it’s just a bigger responsibility, I think.

Correction (Aug. 21, 2018): A previous version of this story misidentified an awards show. It was the Emmys. The story also misidentified the name of a TV show King appeared in. It was ABC’s “American Crime.” The text has been corrected.