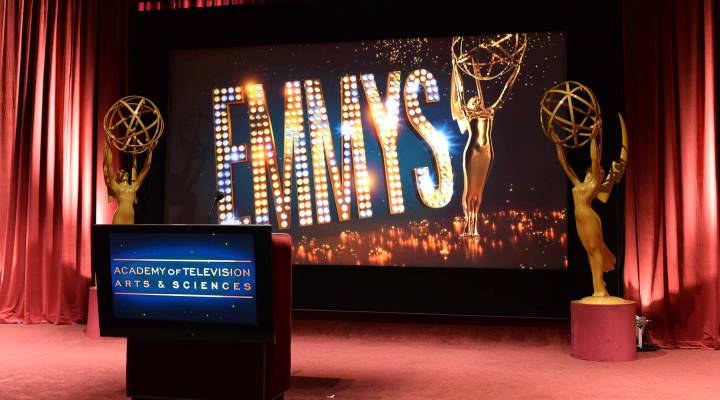 It has been a busy week for Karen Wood and her team at Backstage Creations, the company that handles the official Emmy Awards gift bags and “The Giving Suite,” the area where celebrity presenters gather while backstage at the show. With the 69th show being held later tonight, the team has another full day of work ahead of them.

“Obviously, it’s a lot more fun than the days that we load the trucks up and set up the suite,” said Wood, founder and president of the company. “But Sunday is definitely a work day for us and we have to be on the ball to make sure we’re getting the return on investment for our clients.”

The clients are the various brands whose products will be features in the suite and included in the gifts bags, which are handed out to the host and the presenters as a thank you from the show’s organizers. Wood spends the entire year leading up to the show handpicking items best suited for the occasion and is already starting to think of items to include in the next year’s gift bag.

She came up with the idea in 1994, when she was working as a talent coordinator on award shows and had to find a way to get the presenters and hosts to the rehearsal on time.

“I was not a creative genius by any means,” she said. “I started inviting friends that had designer sunglasses and various items backstage to the green room, to give celebrities something to do in their down time while they were waiting for the stage to be ready. And lo and behold my phone started ringing off the hook with people wanting to have this exclusive access and the light bulb went off. I realized that this is a great marketing concept.”

For the next few years, Wood did this on the side in addition to her talent handler job. In 2000, she quit her job and launched Backstage Creations.

“I came up with this idea thinking it would help me to solve a problem that I had, not knowing that it would turn into a future career,” she said.

Priyanka Chopra visits “The Giving Suite” on Saturday, the day before the 69th primetime Emmy Awards.

The gift of media exposure and taxes

In addition to creating gift bags for the Emmys, Wood’s team works on gifts for other events such as Teen Choice Awards and MTV Video Music Awards. For some events, they set up a giving suite, where celebrities can catch up with other presenters while enjoying products from various sponsors and selected brands. For this year’s Emmys, the giving suite was designed by Josh Johnson Home and will feature items such a kombucha cleanse, Ferrari Brut Rose and Wolverine shoes. The gift bag will include a variety of items, including:

Among the intended recipients are Stephen Colbert, the host of the 69th Emmy Awards, and presenters such as Viola Davis, Melissa McCarthy, Dolly Parton, Jeremy Piven and Adam Scott.

The main reason why brands want their products in the suite or the gift bag is to gain the media exposure that comes from being associated with such a high-profile event.

“If you’re a resort property and people read about your resort and feel that celebrities may be visiting the resort, that resort could go to the top of the list for some travelers because they may want to hang out where the celebrities stay,” explained Wood. “Another benefit is if the celebrities do visit the resort, they may happen to post something on social media and garner some more exposure for the property as well.”

Craig Robinson stands next to a kombucha cleanse display inside The Giving Suite on Saturday, day before the 69th primetime Emmy Awards.

The gifts are not exactly “free” however. Recipients of gifts valued at $600 or more are required to pay taxes on them, as if they were income. Over the years, the expensive gift bags have landed awards shows and celebrities in the hot water with the government. To paraphrase Ben Franklin, there are only two things certain in life: death and taxes.

Back in 2006, the Oscars and the IRS reached an undisclosed settlement over money owed on gifts from previous years. At that time, the Academy Awards announced that the Academy members voted and decided to avoid the issue altogether by no longer issuing official gift bags.

Around the same time, the IRS was also trying to reach a deal with the Academy of Television Arts and Sciences, which hosts the Emmy awards, according to the Washington Post. As a result, recipients of Emmy gift bags that year had to sign a “statement acknowledging that recipients bear responsibility for paying taxes on the goods” before walking off with one.

Wood and her team do “everything to follow the letter of the law,” she said. “Everyone has to pay taxes. That’s the law and we would never want anyone to break a law. If you think about it, if a celebrity is on a movie and they get their wardrobe at the end of the movie that’s taxable. They have to pay taxes on that.”

Despite the Oscars discontinuing official gift bags, year after year there continues to be coverage of the Oscars’ gift bags. Earlier this year, US magazine reported on the $25,000 Madison & Mulholland gift bag sent to celebrities attending the Oscars. Last year, a marketing company called Distinctive Assets put together a 2016 Oscar’s gift bag worth as much as $232,000, which was also widely covered.How is that possible? Well, according to Wood, these “unofficial” gift bags are part of ambush marketing strategy, which uses the award show’s name without permission. Not all the companies that have their products places in the “unofficial” bags are aware that these bags are not actually associated with and sanctioned by the award show’s organizers.

“A lot of brands complained to us that they have worked with an unofficial marketing company, not knowing there was an official one,” said Wood. Among the complaints is that these companies do not have access to the hosts and celebrities and are also not allowed to use the show’s name or logo in their promotional materials. “Everything that we put out with the Emmy name has to be vetted and approved by them because it’s their name. And the other other company doing this, it’s like the Wild West.”

Among the reasons why the Emmys might want to vet items for the gift bags is to avoid having their name associated with problematic items or products that are direct competitors to the award show’s advertisers and sponsors. If a competitor is getting media exposure through ambush marketing, it could dilute the value of the sponsorship, explained Wood.

The award shows are not taking this lying down, either. Last year, the Oscars filed a lawsuits against Distinctive Assets for infringing on their trademark.

Months after the lawsuit was filed, the Academy and Distinctive Assets reached a settlement as part of which the marketing company agreed to stop using the Academy’s name, logo and hashtags. The company is, however, allowed to tell its clients that the gifts are given to Oscar nominees.