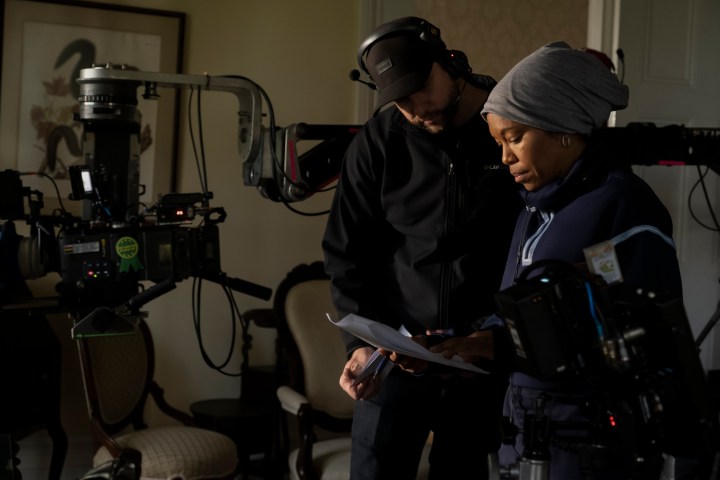 COPY
"All of those things that make me who I am, I'm bringing to the storytelling process," says actor-director Regina King. Courtesy of Amazon Studios.

"All of those things that make me who I am, I'm bringing to the storytelling process," says actor-director Regina King. Courtesy of Amazon Studios.
Listen Now

In her directorial debut, celebrated actor Regina King makes us flies on the wall of history.

Adapted from Kemp Powers’ play of the same name, “One Night in Miami” is a fictional retelling of a moment in 1964 when Malcolm X, Muhammad Ali, Jim Brown and Sam Cooke met in a Miami hotel room following Ali’s title bout with Sonny Liston. The movie focuses on the imagined conversation the four have, debating their careers, their involvement with the civil rights movement and the price of responsibility.

For King, who has been honored with an Oscar and four Emmys, this conversation remains relevant. “The things that they were discussing are happening now, when all of the recent killings of Black people by cops had taken place,” she said during an interview with “Marketplace” host Kai Ryssdal. “Because it was during a pandemic, it made a relevant conversation urgent.”

Kai Ryssdal: Did it take your directing to get this story told?

Regina King: You know, honestly, not to sound like, whoo, that is not a humble woman right there….

Ryssdal: Well, look, let’s be honest. I mean, come on. We had you on this program a couple of years ago, and you were just starting to move behind the camera. You now have [Emmys], there’s an Academy Award. There’s your first directorial debut in this film. I mean, come on. It’s not like you’re nobody.

King: Oh, well, yeah. But I just feel like the roles choose the actor, and I kind of feel a bit of that as a director. Regardless if this story is about a Black woman, about an actress — all of those things that make me who I am, I’m bringing to the storytelling process.

King: Hmm. Well, for me going into it, the conversations that these four men were having were always relevant because, unfortunately, the things that they were discussing are happening now, when all of the recent killings of Black people by cops had taken place. Because it was during a pandemic, it made a relevant conversation urgent. We can’t say that we love America and not be honest about all of what America is. You know, as many qualities that we say, you know, I’m proud to be an American, there are equally as many qualities that are not ones filled with pride, at least for me, and for most marginalized people that I know that are American. You know, those things are just as much a part of the fabric of the country as any other.

Ryssdal: I want to play a cut from the film here, and it’s the character of Malcolm X played by Kingsley Ben-Adir talking to Leslie Odom Jr. as Sam Cooke. And then I want to ask you about it. Here you go.

Kingsley Ben-Adir (as Malcolm X): Sam, you have possibly one of the most effective, beautiful outlets of us all. You’re not using it to help the cause, brother.

Leslie Odom Jr. (as Sam Cooke): Hell I’m not! I got the masters to my songs. I started a label, I’m producing tons of Black artists. Don’t you think my determining my creative and business destiny is every bit as inspiring to people as you standing up on a podium trying to piss them off?

King: Yeah. And the reality is, is that both ways are necessary when you’re talking about using your platform to achieve true equality or equity. They both are necessary. They’re situational, right? Depending on what the situation is in that fight or when they are used together harmoniously. My hope is that what we’ve presented, people will leave or have left the film feeling like, ‘Yeah, I see where they’re both right.’

Ryssdal: Given this moment in this country, and really, the moment was last Memorial Day, right, and George Floyd, and all that has happened since, and the awareness that has been raised … are you hopeful?

King: This is what I’ll say. Fifty years on this Earth and very much aware of our history and how it has repeated itself, my expectations are low, but my energy is high.