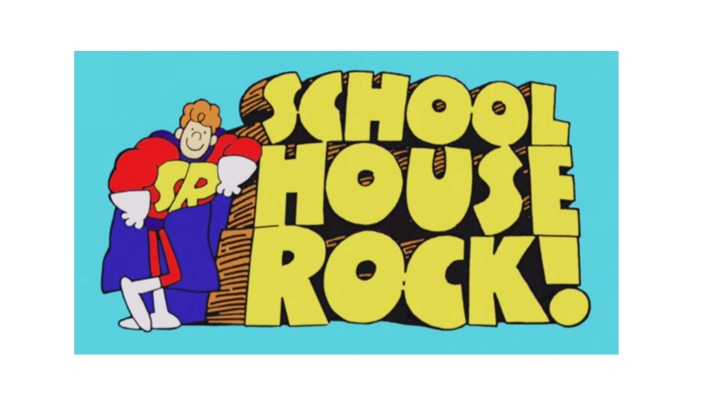 From Disney's "Schoolhouse Rock!", uploaded to YouTube by NBC

From Disney's "Schoolhouse Rock!", uploaded to YouTube by NBC

Do you know what it takes for a bill to go from sitting on Capitol Hill to being a law? The words that hook up words like “three favorite cars”? Can you name the magic number? You’re not alone. Since “Schoolhouse Rock!” first aired more than 45 years ago, the program has educated generations of Americans on civics, history, math, science and language.

“Schoolhouse Rock!” started with a simple idea: that lyrics are more memorable than facts and figures. Advertising executive David McCall thought of the idea when he heard his son singing along with song after song on the radio, even through the same child struggled to remember basic multiplication rules. McCall shopped the idea of music-based education around to friends, family and, eventually, professional collaborators like jazz musician Bob Dorough, who would go on to become the show’s musical director.

The original team started with several math-based songs, launching the show in 1973 with a “Multiplication Rock” season, including fan-favorite “Three Is a Magic Number.”

The show proved popular among the wider public and critics alike. The “Multiplication Rock” album for this season even earned Dorough a Grammy nomination in 1974.

“Schoolhouse Rock!” found itself on a roll, following the success of “Multiplication Rock” with “Grammar Rock,” which brought more hits, like “Lolly, Lolly, Lolly, Get Your Adverbs Here” and “Conjunction Junction.”

With two strong seasons under its belt and the United States bicentennial approaching, the third season of “Schoolhouse Rock,”, “America Rock,” capitalized on this success with several songs on civics education and American history. One song from this season, “I’m Just a Bill,” introduced one of the most memorable characters in its collection, and has since become a cornerstone of the lasting cultural relevance of “Schoolhouse Rock!”

It’s not hard to find ol’ Bill in pop culture, from being sampled on Groove B. Chill’s “Top of the Hill”, to being parodied by “The Simpsons,” “Saturday Night Live“ and “Jimmy Kimmel Live!”, to being referenced by real-life lawmakers.

The program went on to launch a “Science Rock!” season and a timely mini-season,  “Scooter Computer and Mr. Chips,” about then-new home computing technology.

In 1985, “Schoolhouse Rock!” was taken off the air by ABC, its slot filled by “ABC Funfit,” an exercise program hosted by Olympic gold-winning gymnast Mary Lou Retton.

But the program’s legacy didn’t end there. “Schoolhouse Rock!” returned in the 1990s after petitions to bring it back, and again in 2009, as climate change became a topic of increasing interest. Even today, you can find new productions of the “Schoolhouse Rock Live!” musical.

Although many of the original creators have retired or died, “Schoolhouse Rock!” is still gaining new fans. Amy Hines, a learning support teacher at Palmyra Middle School in Palmyra, Pennsylvania, decided to try out “Schoolhouse Rock!” on her sixth grade class a few years ago after remembering it from her own childhood.

“I wasn’t sure whether they were going to think it was too old-school or think it was nerdy, but they love it,” she said. “It’s easy to remember, and they’re catchy tunes.”

Hines said her students regularly ask to use their free class time to watch “Schoolhouse Rock!” videos on school-issued iPads.

The enthusiasm doesn’t end when the school bell rings. When one of her students saw his neighbors getting rid of an old “Schoolhouse Rock!” lunchbox and several CDs, he brought them in as a surprise gift for Hines.

“It was one of the coolest things the kids have ever done,” Hines said.