You have probably come across the phrase “wage hike” a lot lately, especially since 19 states increased the minimum wage in January.

It’s used by journalists everywhere, and that’s no surprise to Katherine Connor Martin, head of U.S. dictionaries at Oxford University Press, publishers of the Oxford English Dictionary. “‘Hike’ is a typical journalist word because it makes its copy punchier, it helps avoid redundancy, and it fits better in a headline,” she said.

Originally, “hike” had nothing to do with economics. Connor Martin said the word emerged in early 19th century England as a verb for walking vigorously or laboriously, but before long, “hike” came to be used transitively with an object to mean moving, pulling or lifting something—like hiking up a skirt or trousers.

The OED documents the first use of “hike” in reference to price in 1904, and it’s not used to tell a happy story. A reporter for the Topeka Capital newspaper wrote that a local store “hiked” ice cream prices from 5 to 10 cents. Bad news for ice cream buyers.

“When things hike, there is always the sense that things are being pulled up against their nature,” Geoff Nunberg, a linguist at UC Berkeley School of Information said. Using “hike,” he said, implies some outside force is yanking up the trousers, or skirt, or wages.

Nunberg said hikes are imposed, they aren’t asked for or welcomed. “You don’t go into your boss’ office and say ‘You know, I’ve been working here eight years, I feel I need a salary hike,'” he said. “That implies there’s something unnatural about it.”

This is the problem when journalists use “hike,” Nunberg said. It suggests raising minimum wages is unnatural. Instead, you could just say increase, which is a neutral word, according to Nunberg.

“Things can increase for the better or for the worse,” he said.

Nunberg calls the word “hike” particularly pernicious because no one notices it. It blends in to what he calls the “linguistic wallpaper.” Nunberg said the next time I report on, or about minimum wage, I should stick to “increase,” and save “hike” for stories about trousers and vigorous walks. 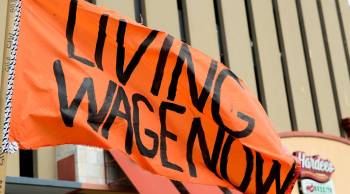 As two more states hike their minimum wage, what are the chances of a federal increase?