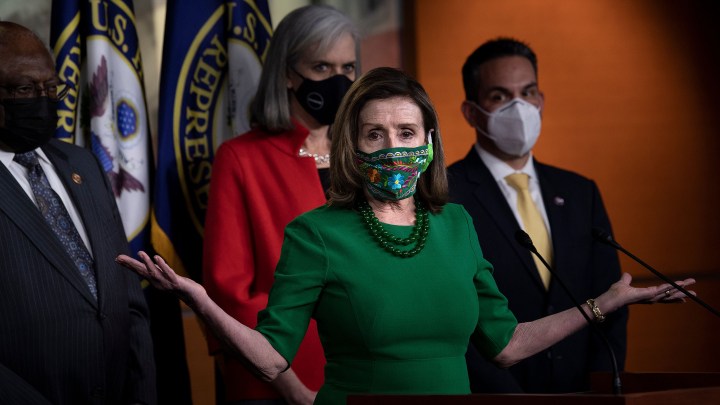 COPY
The House passed a COVID relief bill over the weekend that does include a provision for raising the minimum wage to $15 an hour. Brendan Smialowski/AFP via Getty Images
COVID-19

The House passed a COVID relief bill over the weekend that does include a provision for raising the minimum wage to $15 an hour. Brendan Smialowski/AFP via Getty Images
Listen Now

Senate Democrats are reportedly planning to drop a backup plan to raise the minimum wage as part of the latest COVID-19 relief bill.

Marketplace’s Nancy Marshall-Genzer has the latest. The following is an edited transcript of her conversation with “Marketplace Morning Report” host David Brancaccio.

David Brancaccio: Nancy, what was this fall-back plan?

Nancy Marshall-Genzer: It was Senate Democrats’ Plan B for raising the minimum wage to $15 an hour. The Senate parliamentarian said last week the wage hike didn’t comply with guidelines Democrats have to follow in order to fast-track the legislation. That prompted some Senate Democrats to come up with this alternative, to raise the minimum wage through tax penalties and incentives. But now it looks like they won’t go with this plan. because it would be hard to implement and enforce. This was first reported by The Washington Post.

Brancaccio: So what happens now?

Marshall-Genzer: The House passed the COVID relief bill over the weekend and sent the bill to the Senate. The House version does include a provision raising the minimum wage to $15 an hour. It’s now unclear whether the final bill will include a minimum wage hike. The Senate is expected to vote on it this week.

Brancaccio: And, as they say, time is of the essence.

Marshall-Genzer: It’s a tight timeline. Democrats want to pass their relief bill and get it signed into law in the next few weeks. That’s because the legislation includes an extension of a weekly, federal unemployment benefit. Right now, that benefit is set to expire in mid-March.