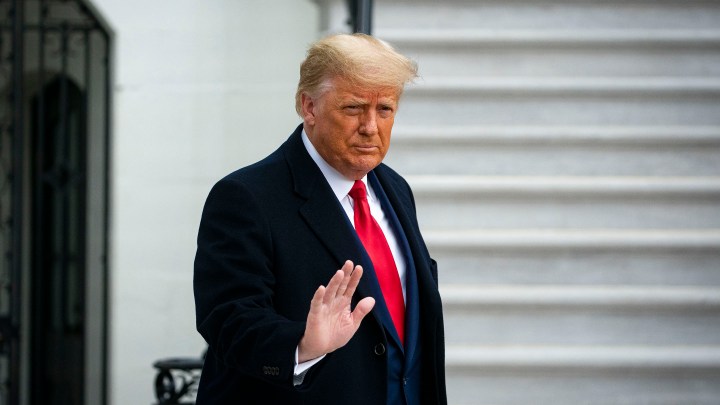 President Donald Trump released a video Tuesday evening saying the $900 billion COVID relief bill passed by Congress is a “disgrace,” needs to be reconfigured and that $600 per person in direct payments is not enough.

Marketplace’s Nancy Marshall-Genzer has more on this from Washington. The following is an edited transcript of her conversation with “Marketplace Morning Report” host David Brancaccio.

David Brancaccio: Nancy, will this delay the relief checks?

Nancy Marshall-Genzer: Possibly. Now, Trump did not specifically threaten to veto the COVID relief bill. If he were to sign it after all, the checks could go out very soon. Treasury Secretary Steven Mnuchin said earlier this week that the money would land in Americans’ bank accounts as soon as next week.

House Speaker Nancy Pelosi tweeted Tuesday night that Democrats could vote this week on a bill that would increase the relief payments to $2,000. That vote could come Thursday. But then the Senate would have to approve it unanimously, which is unlikely.

Brancaccio:And what happens if Trump vetoes the bill?

Marshall-Genzer: Both the House and Senate approved the COVID relief package by veto-proof majorities — Congress can override a president’s veto with a two-thirds majority in each chamber. But those votes would have to be scheduled, and many members of Congress have already gone home for the holidays.

Brancaccio: So, realistically, if the president doesn’t sign this bill right away, people won’t see those checks for a while?

Marshall-Genzer: Right. And even if President Trump does nothing — if he doesn’t veto it, but also doesn’t sign it — it still takes 10 days for the bill to become law without his signature.