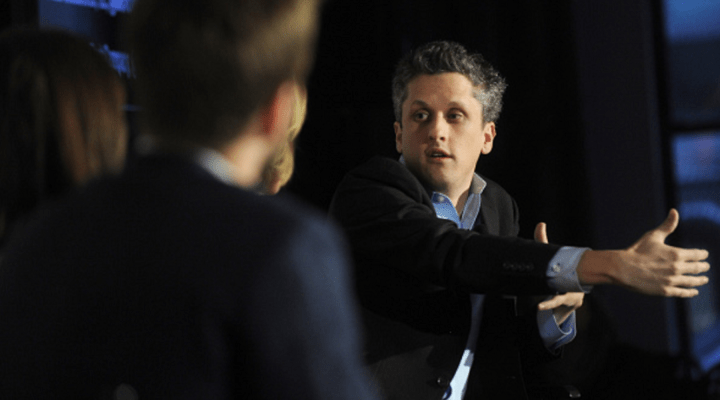 COPY
The co-founder and CEO of Box, Aaron Levie, speaks on stage during "The Fast Company Innovation Festival" in late 2015.  Brad Barket/Getty Images for Fast Company

Technology companies, big and small, have generally adopted a wait-and-see attitude toward the Donald Trump administration.

Tesla’s high-profile CEO Elon Musk seemed to have been a part of a “budding bromance” with the president, according to the New York Times. But attitudes shifted sharply over the weekend as his immigration limits and refugee bans went into effect. Part of his executive order includes a 90-day ban on citizens from seven Muslim-majority countries, including Iran, Iraq and Yemen.

You can also add Aaron Levie, the CEO of the popular cloud storage company Box, to the list of tech leaders criticizing Trump’s actions.

He joined us to talk about his moral and practical objections to the immigration rules.

Aaron Levie: I mean, one of our co-founders, for instance, is Iranian. So this directly is in opposition to what we believe about how you build great cultures of innovation, which is bringing in people from all around the world and all sorts of backgrounds. Secondarily, I think what’s maybe a little more unique to technology companies, and why you’ve seen such a resounding response, is most of our companies are global nearly on Day 1. And both the rhetoric of, you know, much of this campaign cycle, as well as now this policy, is very divisive, to our allies, to our partners, to our customers, globally. And that’s incredibly, we think, dangerous.

David Brancaccio: What do you think, Mr. Levie, Silicon Valley leaders — tech leaders — were seen as somewhat, I don’t know, “wait and see” about Donald Trump since the election. But are you seeing the mood changing since the weekend?

Levie: Well, I think that once the campaign ended, once the election was over, I think people moved into more of a pragmatic mode, which is, “OK, this is the reality, so we have to find a way to be as productive as possible, we might as well ensure that things go as smoothly as possible.” Then what happened, you know, on Friday and throughout this weekend, I think made it obvious that what we saw in the past year to year and a half was not just rhetoric, but was intended to be policy. And that you know obviously brings up a new level of concern that our companies and our leaders are going to care about.

Brancaccio: Now, this has already spread beyond technology companies. You have Howard Schultz of Starbucks also speaking out about the change in immigration policy and the refugee bans. But, you know, a lot of the top CEOs of tech have been the ones being the most public this weekend. Do you think it will spread to other parts of industry?

Levie: I think we’re hyper-sensitive to the signal and the message that these types of actions and orders send to the rest of the world. I do think that that will trickle into the businesses that equally, you know, either share those values, or are going to see that kind of impact, or where it’s just very clear from a moral standpoint how disastrous this policy is. And you will see more businesses, more leaders step up, like Howard has done, and as many others are starting to begin to do. Jeff Immelt at GE similarly has put out a very strong message. I think you will see that from more business leaders throughout the week.

Brancaccio: The administration argues that this is about national security. Are you not sensitive to those issues?

Levie: I’m very sensitive for the need to keep the U.S. secure, and also highly driven by data and logic in thinking that through. And there’s no data to suggest that anything about this particular ban would improve our security. And in fact, you know, most of the kind of bright minds on this subject reinforce and suggest this will harm our security in its ability to, you know, to really kind of fan the flames of our enemies and importantly, you know, divide us from our allies. So I don’t think there’s anything about this ban that could make us more secure.

Brancaccio: You’re part of a group called TechNet that advocates for, you know, what you call the innovation economy with different levels of government — the feds, local. Do you think this immigration issue is going to be part of your concrete advocacy efforts going forward with that group?

Levie: Yeah, I mean, I think that immigration broadly is an area that the group tends to take a pretty strong stance on, and obviously this is now incredibly timely. So I would expect to see a significant push, either through the member companies, which include companies like Google, Apple, Facebook, Microsoft and others, or through the coalition more broadly as a group of companies. So, one or the other, you’re going to see a big push from the tech industry on this.