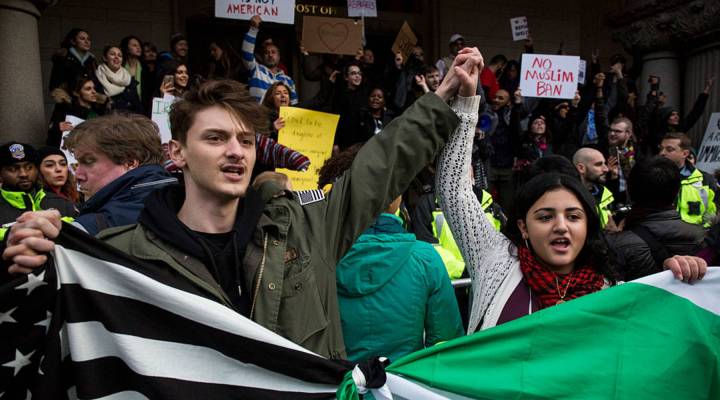 While the Department of Homeland Security initially said this order would affect green card holders, a senior White House official later said they could return to the U.S. pending additional screening.

Trump cited terrorism as the reason behind his decision.

“To be clear, this is not a Muslim ban, as the media is falsely reporting,” he said in a written statement. “This is not about religion — this is about terror and keeping our country safe.”

However, various people who have committed terrorist attacks in the U.S. come from countries, such as Saudi Arabia and Egypt, that are not included on the list. Trump also has business ties with these regions.

Various leaders from Silicon Valley have criticized the Trump administration’s actions. These statements and actions come over a month after Trump met with the heads of several tech companies at his Manhattan tower.

Tesla CEO Elon Musk said the ban is not the “best way to address the country’s challenges.”

Google co-founder Sergey Brin, whose family emigrated from the Soviet Union to the U.S. in 1979, joined protesters at San Francisco International Airport.

Apple’s Tim Cook said that the order “is not a policy we support.”

And Aaron Levie — the CEO of Box, a cloud storage company — told Marketplace in an interview that Trump’s policy is “dangerous.”

“This directly is in opposition to what we believe about how you build great cultures of innovation, which is bringing in people from all around the world and all sorts of backgrounds,” Levie said.

International reaction to Trump’s immigration ban is still coming in, with some of the affected countries vowing to respond with similar measures.

Iran’s foreign minister, Mohammad Javad Zarif, tweeted that the country will take “reciprocal measures to protect citizens,” though he noted that all with valid Iranian visas would be “gladly welcomed.” Meanwhile, the Iraqi parliament has voted on a “reciprocity measure” that would affect Americans trying to enter the country.

France, Germany, Canada and Luxembourg have each expressed disagreement with Trump over the ban.

French Foreign Minister Jean-Marc Ayrault said “Welcoming refugees who flee war and oppression is part of our duty,” and Germany’s Sigmar Gabriel said “Loving your neighbor is a major Christian value, and that includes helping people.” On Twitter, Canada’s Prime Minister Justin Trudeau wrote that the country would welcome those who are fleeing regardless of faith.

But some governments, while not in complete agreement with Trump, aren’t completely disavowing him. In the U.K., which has invited Trump for a state visit, more than 1.3 million people have signed a petition calling for a cancellation, but Prime Minister Theresa May said the invite will stand.

This weekend, thousands of lawyers mobilized at airports across the country. At Los Angeles International Airport, lawyers had turned a restaurant inside the international terminal into a makeshift legal office. Others were walking around with signs that said “Attorney — I can help.” And because there was so little information available from authorities, many of the lawyers just scanned the airport approaching people who looked distressed.

One of the lawyers, Adam Astan, an Iranian-American, had a sign in Farsi.

“I want to be able to help people who are waiting for family members and don’t know want to do and don’t know what their rights are, so just helping them understand that they do have some rights,” Astan said.

He said much of their work is time-sensitive.

Astan is not an immigration lawyer. In fact, many of the attorneys who volunteered this weekend came from different backgrounds. Some of them helped to file petitions in federal court challenging the detention of specific people. Along with the volunteers, lawyers from the American Civil Liberties Union were also on hand.

Over the weekend, the ACLU broke its fundraising record. More than 350,000 people donated money online, totaling $24 million. In a normal year, the activist group makes about $4 million in online donations.