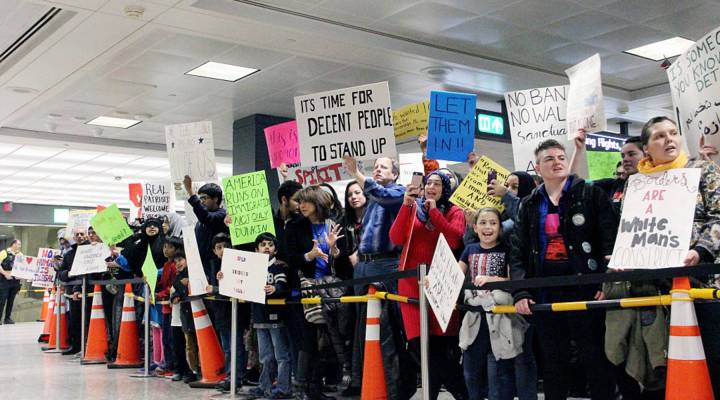 President Donald Trump’s immigration ban on Friday created confusion about whether his rules would apply to those who hold green cards.

Over the weekend, green card holders who are citizens of these seven countries were denied entry into the U.S. But the Trump administration eventually eased its ban, allowing them to come back in. However, they may still face extra questioning at the border.

Sama Dizayee, a Washington-based journalist originally from Iraq, had plans to fly to London in the upcoming week. But she had to cancel when the president signed the new rules, leaving her uncertain about whether she could re-enter the U.S. She joined us to talk about her initial reaction to the order and the hurdles that exist for refugees who want to come to America.

Sama Dizayee: So on Saturday morning, I realized that I can’t even go to London, because if I would go, then I will not be able to come back. And obviously the executive order wasn’t really clear whether or not those holding green cards or, you know, legal residents here in the U.S. can return back. So we looked into this — me and my friends — and it turned out that, actually, green card holders who are lawful residents here in the United States cannot come back if they leave the country if they are from those seven countries. So I was like, OK, I gotta cancel my trip now, I guess.

David Brancaccio: And did you go to the airport, or you just never went?

Dizayee: When I realized that I can’t go to London on Thursday, I contacted Virgin Atlantic to tell them about my situation, and I told them I’ve been affected by the ban, and now my ticket, my flight that is non-refundable, I can’t really use it. And so I told them if there’s any way they could help me. Now they fought it back for a while, for about a couple of hours. I was exchanging tweets online. Eventually people picked up the tweet, and they started attacking Virgin Atlantic, telling them the least they could do is stand with people who are affected. Twenty-four hours from that, you know, they called me, they actually messaged me on Twitter, and they said they have enforced a new policy for those affected by the ban. And they will refund those who have non-refundable tickets or rebook them to any date they would like.

Brancaccio: And you’ve been calling around to other airlines to see what their policies might be?

Dizayee: I went yesterday to Dulles International Airport here in D.C., and I spoke to all of the airlines that were on the counter over there. Some of them are helping, some of them they’re waiting on instructions, and some said they have a new policy updated onto their website. They are refunding and rebooking those affected by the ban.

Brancaccio: So it may depend on the airline, and if someone is affected, they better check first.

Dizayee: Exactly. So for example, Turkish Airlines, I asked them, you know, what if someone’s affected by the ban? They said currently they go by the ticket rules; they don’t have anything in place. So if your ticket is non-refundable, unfortunately it is non-refundable. They said, however, down the road in the next couple of days — because this happened out of the blue and nobody was expecting it — they might enforce a policy that even for those who have non-refundable tickets, they will refund them. Even those for, say, today — their ticket expires — they might refund them as well. You never know, some airlines do care about their reputation.

Brancaccio: But you also see this as a business issue. What, for the airlines?

Dizayee: Absolutely, David, because, you know, these airlines, they’re currently refunding a lot of people. They’re rebooking a lot of tickets. Therefore, they’re losing money out of this, and therefore the airlines should stand against this ban because it’s affecting their business.

Brancaccio: Let me ask you something, Ms. Dizayee. You have a green card in your wallet right now. That is permission to live and work in the U.S. The idea is that it was supposed to be permanent, right? Did you ever, before this happened, worry that even with your green card you might get stuck trying to get back in if you traveled?

Dizayee: I’m glad you asked this question. Although I live in D.C., I love to travel. My father was a pilot, so I come from a traveling family. We’ve traveled throughout our entire lives. I travel to London often, because I went to school there and all my friends live there. When I first came here, and I got my green card, I was like, ‘Hey, at least I’m going to go to a couple more countries that I wasn’t allowed to go when I only had my Iraqi citizenship. But now I can.’ I was in shock for hours when the executive order came out. And now I feel like, it’s might as well go home and stay on my Iraqi passport and go nowhere. I mean, that’s not the point though.

Brancaccio: I also understand you have a separate issue with your mother?

Dizayee: Yes, David, so my mom — she’s a refugee from Iraq. She came here about a year and a half ago. And it’s not only that, you know. People don’t know how long the application process for these refugees take. It already has taken one year for her green card process, and she still hasn’t gotten it. And now that this executive order is in place, it might get more complicated. A lot of people don’t know this, you know. A lot of people say, America does need a vetting process. You know, letting all of these people in — this is the least America can do. Now, I agree. But do you know what refugees really go through when they come here to the United States? It took me five years for my refugee case to get approved. It took my mom six years for her refugee case to get approved. Meaning that, you know, we were in our home countries during that period of time. So that five years, that six years is the vetting process. So it’s not just like you apply your application, and then, hey — welcome to America! No. It really takes a lot of time. There are people who have been waiting for seven years for their application to get approved. Now those who’ve already been waiting years and years — now they can’t come. How is that fair?