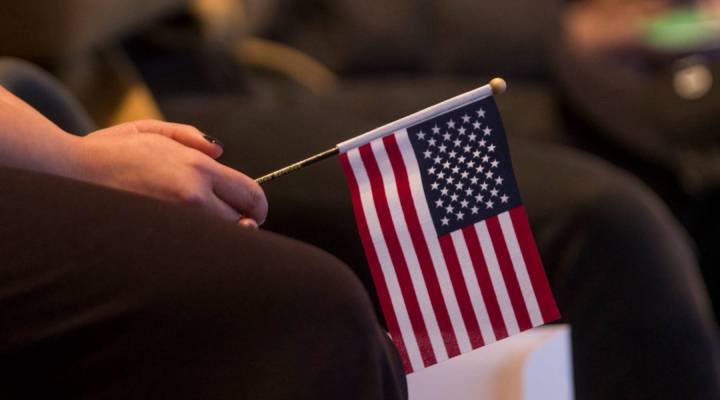 It’s 9:30 in the morning. In this classroom in Buffalo, New York, that means it’s time for English. At the front of the room is a white board with today’s vocabulary lesson written in black marker.

“This one is a special one,” the teacher says. “It’s about opposites. What are opposites?”

“Different,” the students call out. They’re bent over their desks, focused. But the fingers gripping pens so tightly belong to adults. These students are refugees from countries like Somalia, Sudan and Syria — the kind of immigrants President Trump has put sharp limits on. His recent executive order blocking immigrants from six countries has been stuck in court, but one key change did go through temporarily: the number of refugees allowed into the country was reduced to 50,000 — just half the limit set by former President Barack Obama last year.

Flights were cancelled and plans changed. One week later, a federal judge in Hawaii issued an injunction, blocking Trump’s order until a final decision is reached. But as the decision winds its way through court, fewer refugees are entering the country.

“As a practical matter, we have seen numbers drop significantly,” said Betsy Fisher, policy director at the International Refugee Assistance Project. Why? “That’s a question for the Department of Homeland Security and the Department of State,” she said.

The economic impact has already been huge. Nonprofits and charities that resettle refugees are often paid per refugee. So it’s not just refugees who are struggling; the programs that help them are too. And that means the job of helping them has become extra challenging.

The organization makes ends meet with grants and local fundraising, but most of its money comes from the federal government. It receives $900 per refugee to cover administrative costs for 90 days. The money has to keep the lights on as well as cover the salaries of staff who do everything from pick refugees up at the airport to teach them how to take a bus or to write a check. But fewer refugees coming in means less funding. So, while the staff here normally is focused on others, now Schillinger has to talk to them about their own worries.

Some of the staff are former refugees themselves. For them, Trump’s executive order represents a double whammy.

Like one man, whose father was dying at home in Syria.

“Clearly this person was stressed, was upset, was in grief. He was mourning,” Schillinger said. “He tried to get back to Syria, and honestly, we said, ‘If you go, you may not come back. We understand what’s going on, but you might not come back to see the rest of your family.'”

The employee was given extra time off. More, Schillinger said, than is standard personnel practice.

The Department of State says the cap on the number of refugees allowed into the U.S. this year is back to 110,000. But Schillinger says once the pipeline shuts down, it’s hard to get it running again. Flights need to be rebooked and paperwork revised. She says Jewish Family Service may not get more refugees in Buffalo until October or even next year. Many nonprofits that receive federal funding are struggling. During February and March, Church World Service, which has offices around the world, laid off almost half its staff, more than 400 workers. Now it has plans to rehire, but not that many.

Nonprofits already work very lean, said Martina Fuchs, founder of Real Medicine Foundation, a global humanitarian aid and development organization that works with hundreds of thousands of refugees around the world. There’s not a lot of fat to trim. They plan ahead, she notes, fundraising a year or more out. Typically her organization receives funding from multiple sources, including organizations it works with around the globe, high-net-worth individuals, foundations, trusts and the United Nations. But all the recent changes have created problems.

“The U.S. has always been a very strong partner in supporting refugees, in supporting aid around the world,” Fuchs said. “And so this global network of support is interrupted.”

Her organization had been working in Ethiopia to create for-profit medical treatments. But now she’s been forced to suddenly ramp that up and race to look for alternatives. A group of professors at a university in Switzerland are trying to come up with a business plan to help raise funds for the foundation.

There’s a misperception about what would happen if the flow of refugees into the country is limited, said Hans Van de Weerd, vice president of U. S. programs for the International Rescue Committee.

“You would see refugee arrivals going down, but you would see the needs of the existing refugee community in the United States increasing,” he said.

The hostile tone set by the new administration has lead to an increase in hate crimes, said Van de Weerd. Even kids are getting harassed in school for their origin or religion. So new funding is needed to teach old refugees, now new citizens, their rights.

“Understanding how the city council works. That when your neighborhood is unsafe, you can actually go into law enforcement and demand for protection,” he said. “There’s a lot of community organizing to be done. Support that’s been built from the ground up. It’s not an activity that resettlement agencies traditionally were involved in. But now, in order to basically defend the interests of their clients they have to do that.”

Van de Weerd said there is a silver lining. Volunteers are stepping up: lawyers, offering to help refugees stuck at airports; teachers, ready to work on English skills; and individuals are writing checks. But while refugees here wait for government policy to solidify, misinformation and rumors are spreading. And that’s going to cost, too.

“Some refugee groups think they’re going to be deported even though they’re legal citizens,” said Jim Sutton, director of community medicine for Rochester Regional Health, which provides medical care for refugees in upstate New York. He said just take a Somali patient he saw a couple weeks ago. “He had actually been here for a couple of years and was really stable.”

Sutton said he’d gotten a job as janitor and was doing well. But then the patient started complaining about headaches and trouble sleeping at night.

“It was just basically anxiety over what he was seeing on the nightly news that was leading him to come into the doctor’s office.” Sutton said this kind of stress has become common.

So if funding is cut, the translators, social workers and doctors whose job it is to help will need to transform resources. Less will need to become more. Sutton runs a program for his staff that reminds employees not to get too deeply involved in refugee’s lives — not to step into the darkness.  But that can be hard to do when your own future feels uncertain.