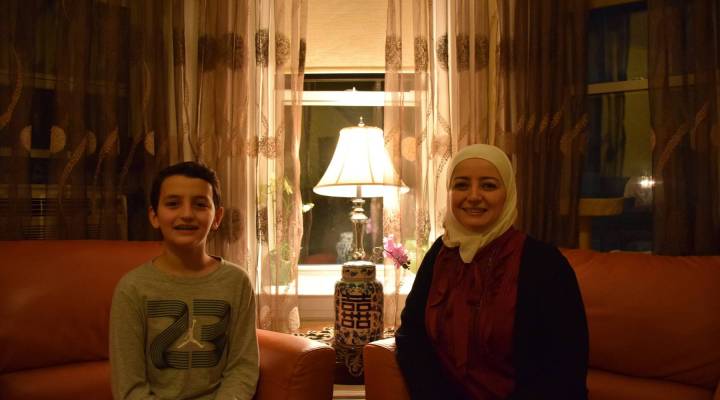 COPY
Obay Saidee, 13, and his mother, Zobaida Almajzoub, moved to the United States from Damascus, Syria, in 2012.  Marielle Segarra/Marketplace

Obay Saidee, 13, and his mother, Zobaida Almajzoub, moved to the United States from Damascus, Syria, in 2012.  Marielle Segarra/Marketplace
Listen Now

Thirteen-year-old Obay Saidee sits on his living room couch in Brooklyn, taking part in an American pastime: daydreaming about what he’s going be when he grows up. A basketball player? A musician? A superhero?

Nope. A dentist. With his own practice.

It’s not the flashiest of career choices. But Obay, who moved from Damascus, Syria to Brooklyn with his family in 2012 because of the war, wants to be his own boss. He said it’s a Syrian tradition. “People in Syria have a certain pride that they don’t like working for others,” he said.

Obay’s father, Mohamad, owned a manufacturing facility back in Syria and is now a mechanical engineer at a factory in Brooklyn. The Syrian entrepreneurial spirit is borne of necessity, he said. “In Syria, when you work for somebody, for a company or for the government, the income is not going to be enough to live a good life,” he said.

Syrians also drill it into their children’s heads that they have to be self-reliant, because there’s little safety net in the country, said Shadi Martini, a Syrian immigrant and a realtor who lives in Michigan. “Since we grow up, our parents will tell, don’t rely on government. They won’t help you. You have to do it by yourself,” Martini said. “Government is not there for us. It’s there for some people who are in high positions and that’s it.

Martini used to live in Aleppo, where he ran a hospital owned by his family. It was part of a network illegally providing medical care to wounded civilians who opposed the Assad regime. He left Syria in 2012 when that got too dangerous.

There’s a reason to think the percentage of Syrian immigrant entrepreneurs might drop. The latest numbers are from 2014. But most people who left Syria because of the war, some 16,000 refugees, have come to the United States in the past two years.

Martini said the two groups are different, because the people who left before mostly did so to get a degree or to open a new business. “People who are leaving now, they had no choice,” he said. “They had to leave.”

Many of those refugees won’t have the resources to start a business, at least not right away. But Martini, who leads a group that provides aid to refugees, said they bring the Syrian ethos of self-reliance with them. “Their No. 1 priority, whenever you meet them and ask them, is how can I work?” he said. “Because that’s the way they knew in Syria.”

Arriving Syrian refugees may actually have an advantage: an existing network, said David Dyssegaard Kallick, director of the Immigration Research Initiative at the Fiscal Policy Institute. “Syrian immigrants happen to be a group that have been very successful here, and so they can help in a number of ways to bring along the new refugees,” Kallick said.

Even so, starting over isn’t easy.

In Brooklyn, Zobaida Almajzoub sets down a chocolate cake, topped with strawberries, on the table in front of her son Obay, the aspiring dentist.

They’ve lived in the United States for almost five years, and Almajzoub says it’s still hard. “The weather is different, the language is different, school is different. Everything in the life different to my country,” she said. “But I start again.”

Like her son, she dreams of opening a business, maybe an import/export firm, in her new country.