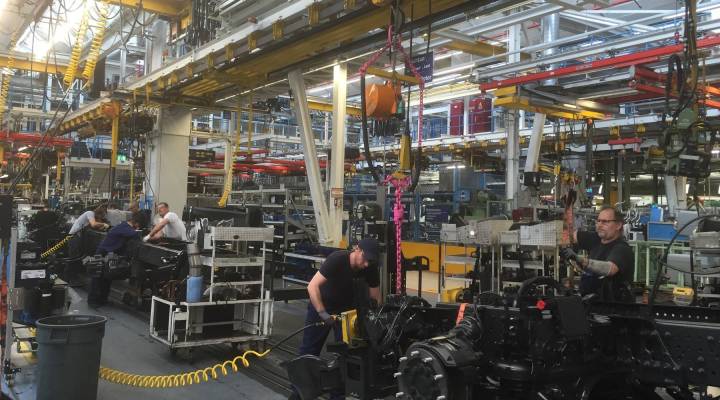 Immigration was one of the key issues that drove British voters to want to leave the European Union.

In the EU, workers can move freely from country to country. And no EU nation has embraced migration more than Germany, which has an aging labor force. In addition to European workers, Germany accepted more than a million refugees last year.

In Worth, Germany, Kathrin Schnurr, who works for Mercedes, showed me an engine, dangling on giant metal chains, that will be dropped into the frame of a Mercedes truck.

Schnurr brought me to the factory to meet men like Wasim, a 40-year-old Syrian refugee (we are not using his last name to protect his family). He fled Damascus two years ago and brought his children with him.

“Everything is fantastic here,” he told me through a translator. “Except today I’m very unhappy because tomorrow is the last day of the program.”

The program in question is a 14-week “bridge internship” that Mercedes runs. Wasim and 300 other refugees are working at Mercedes plants across Germany. They’re from Syria, Iraq, Eritrea, Somalia.

The training isn’t really about learning to make a Mercedes. There’s no guarantee of a job afterwards. Though the refugees can apply for formal apprenticeships once they meet Germany’s work standards.

In addition, people like Ayse Ozbabacan are working to bring refugees and other immigrants into German society. Ozbabacan runs the integration office in nearby Stuttgart, and it’s her job to help outsiders settle here and find work.

“That means of course language courses, sports, cultural activities,” she said. “And of course the access to the labor market. Which is of course a very hotly debated issue.”

Forty-five percent of people in Stuttgart were either born abroad or are the children of immigrants. Traditionally, they’ve come to Stuttgart to work at the big companies here like Mercedes, Porsche and Bosch.

Recently, Germany’s right wing and eurosceptic party, the AFD, campaigned on opposing immigration. But since the Brexit vote, support for the AFD has dropped.

Some 9,000 refugees have settled in Stuttgart over the past year.

And Ayse Ozbabacan, who is a Kurd originally from Turkey, said one of the small pleasures of her job is using her own life story to show them a path to succeed here.

After she shows families to their new housing, some tell her she is an inspiration.

“They are just saying we are so proud that someone of us is working for the city administration,” she said.  “I wish it also for my children that they get the same chance that you did as your family did to start a new life here and to be an important part of the society.”

When I asked her what she considered her identity to be, Ozbabacan told me she is Kurdish, Turkish, German, and very importantly: European.