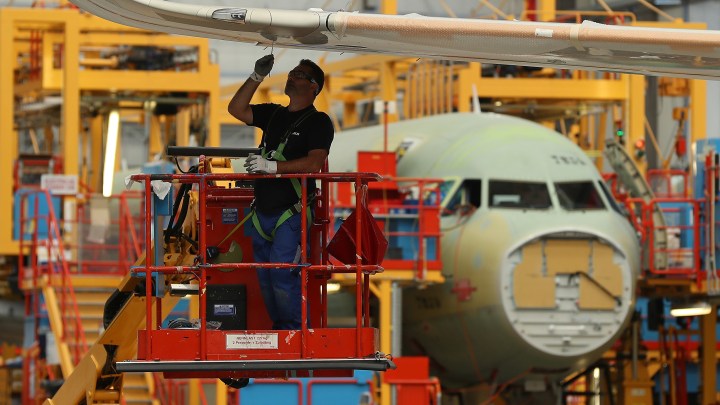 COPY
A worker fits a part to a wing of an Airbus passenger plane in Hamburg, Germany in 2017. Sean Gallup/Getty Images
Trade showdown

A worker fits a part to a wing of an Airbus passenger plane in Hamburg, Germany in 2017. Sean Gallup/Getty Images
Listen Now

The escalating trade war between the United States and China has been center stage in recent weeks, but there’s an even bigger fight waiting in the wings. The U.S.-European Union trading relationship — the biggest in the world — is once again under strain.

President Donald Trump infuriated the Europeans last year when he slapped tariffs on steel and aluminum imports, and, while the impact of those tariffs has been muted, Trump has now renewed transatlantic hostilities by threatening a fresh wave of duties on European produce like cheese and sausages. He’s proposing to take this action over the subsidies for plane-maker Airbus.

“This could completely derail U.S.-EU trade negotiations, which, to date, haven’t really lifted off the ground,” said Nick Marro of the Economist Intelligence Unit, the British research and analysis group.

“If Trump does move forward with these proposed tariffs, that’s going to kill a lot of the goodwill before the negotiations even begin,” he said.

Relations are likely to sour even further if the president decides later this year to jack up the tariffs on imports of European cars. Andrew Kenningham of consulting firm Capital Economics said that would badly dent Europe’s biggest carmaker and dominant economy.

“Germany could be pushed into recession by this,” he said. “It would come at a time when the auto industry is already struggling.”

But Trump may be sorely tempted to take this action. Germany has a bigger trade surplus with the United States than China does, and European tariffs on American car imports are much higher than American tariffs on European vehicles.

“My guess is that if he feels a tariff hike on European cars will play well electorally, he will go ahead and do it,” Kenningham added.

European politicians and policymakers are clearly nervous about Trump’s next move but, oddly enough, according to Peter Holmes of the UK Trade Policy Observatory at the University of Sussex, the sharp escalation in the U.S. president’s trade war with China has, perversely, given some Europeans cause for hope.

“There’s a general feeling that while Trump’s obsessed with China, he’s probably not going to start a war with such intensity on the EU,”  Holmes said.

Europe’s sympathies are divided over the issues in the Sino-American conflict. On the one hand, the EU shares U.S. concerns about China’s theft of intellectual property and state aid for Chinese enterprises, but on the other hand, Holmes said, many Europeans side with China in criticizing what they see as Trump’s cavalier attitude to the current multilateral trading system.

Across Europe, there is a growing unease that the U.S.-China clash could exacerbate the slowdown in world trade and even herald the beginning of the end of globalization.