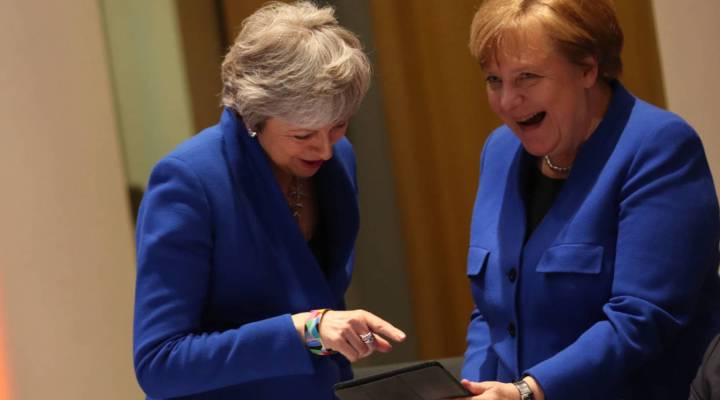 COPY
British Prime Minister Theresa May, left, and German Chancellor Angela Merkel look at a tablet ahead of a European Council meeting on Brexit at the Europa Building at the European Parliament in Brussels on April 10. KENZO TRIBOUILLARD/AFP/Getty Images

British Prime Minister Theresa May, left, and German Chancellor Angela Merkel look at a tablet ahead of a European Council meeting on Brexit at the Europa Building at the European Parliament in Brussels on April 10. KENZO TRIBOUILLARD/AFP/Getty Images
Listen Now

The world has followed the Brexit imbroglio with astonishment, dismay, derision and laughter. The endless, inconclusive debates in Parliament, the twice-delayed departure date, the thrice-rejected withdrawal agreement, the United Kingdom’s apparent inability to decide how, when or even whether it wants to leave the European Union.

The German “Heute” (Today) TV show has been particularly scathing. Recent editions have mercilessly mocked Britain’s tortuous departure from the bloc, ridiculing a succession of bungling, bumbling British politicians including the hapless Prime Minister Theresa May. The show has taunted Britain’s  indecision, employing a sock puppet and a piece of cardboard to explain to “our English friends”  how to leave the European Union.

But not everyone in Germany believes that the U.K. deserves all this derision, nor that it’s the sole architect of the farcical attempt to exit the union. A handful of leading German economists say the EU negotiators are also to blame for the shambles. These economists argue that Brussels backed the Brits into a corner and made a smooth exit impossible.

“I understand exactly why the U.K. Parliament did not want to sign up to the Withdrawal Agreement,” professor Gabriel Felbermayr, head of the Kiel Institute for the World Economy, told Marketplace.

“If I ask myself what would a German parliament do, how would they decide, I think they would have done the same thing,” he said.

Felbermayr believes it was a mistake for the EU to insist on a two-stage deal whereby the U.K. would pay a $50 billion exit fee upfront without a guaranteed free trade agreement with the bloc.

“The U.K. would be giving away its bargaining chips,” he said. “This cannot lead to a successful, mutually beneficial deal.”

Professor Marcel Fratzscher, head of the Institute for Economic Research in Berlin, also accuses the EU negotiators of taking a coercive approach and throwing their weight around.

“I fully understand why the U.K. Parliament rejected the deal,” he said. “It did not leave British lawmakers with a free choice about the future relationship between the EU and the U.K. The negotiating strategy has failed, and it’s a failure on everyone’s side, including the European Commission.”

Fratzscher, Felbermayr and a handful of other German economists believe the EU should start afresh and adopt a more accommodating and even-handed  approach to Brexit. But Michael Wohlgemuth of the Open Europe think tank in Berlin said this is still a minority view in Germany.

“I think it’s a very academic debate that doesn’t go very far in influencing the government position,” Wohlgemuth told Marketplace, adding that most of the German people back the EU’s hard-line attitude to Brexit.

“Some in Germany might even think that without the Brits, the European continent and its integration can go further and will be better served,” he said.

The German government’s highest priority in the Brexit imbroglio is to protect the integrity of the European Union, and Ana Andrade, a senior analyst with the Economist Intelligence Unit in London, points out that there is a risk that other member states might be tempted to leave the bloc if Britain departs on very favorable terms.

But there is a danger here for Germany. The U.K. is a major export market for German goods, and a disorderly Brexit, combined with the current slowdown in China and other factors, could knock the already weakening German economy.

“If there are a lot of additional negative shocks — a hard Brexit, for example — and if Donald Trump decides to impose tariffs on imported autos from Europe, then all of these could definitely bring the Germany economy into recession,” Andrade said.

And that would certainly terminate a rich seam of comedy for the German satirists. Brexit might not then prove quite so hilarious, after all.