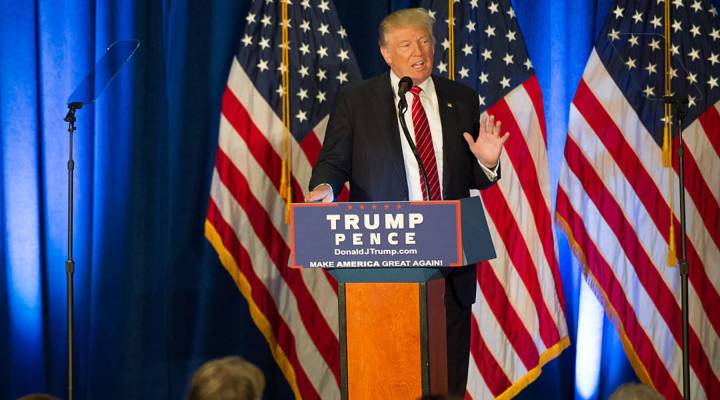 COPY
Republican candidate for President Donald Trump holds a campaign event at the Kilcawley Center at Youngstown State University on August 15, 2016 in Youngstown, Ohio. In his address, Trump laid out his foreign policy vision for America. Jeff Swensen/Getty Images

Republican candidate for President Donald Trump holds a campaign event at the Kilcawley Center at Youngstown State University on August 15, 2016 in Youngstown, Ohio. In his address, Trump laid out his foreign policy vision for America. Jeff Swensen/Getty Images
Listen Now

Republican presidential nominee Donald Trump is calling for more thorough vetting of immigrants and visitors to the United States, including ideological tests. In a foreign policy speech Monday in Youngstown, Ohio, Trump also called for an end to the foreign policy of “nation building”, citing the Iraq war as an example of how the policy went wrong.

“I just said it so many times, virtually every time I was interviewed: Keep the oil, keep the oil,” Trump recalled in his speech. “If we had controlled the oil, like I said we should, we could have prevented the rise of ISIS… both by cutting off a major source of funding and through the presence of U.S. forces necessary to safeguard the oil, and vital infrastructure products necessary for us to have the oil.”

Most of the speech was a criticism of President Obama’s foreign policy, which Trump claimed led to the rise of ISIS, a charge the White House and many foreign policy experts dispute. Trump also called for a fresh round of sanctions on Iran, and for the U.S. to work more closely with countries fighting “radical Islamic terrorism”, such as Russia and Egypt, even though Egypt also falls into a category Trump said his potential administration would speak out against—those that crack down on those in the LGBTQ community.

In addition to calling for a more stringent screening process for visas to enter the U.S., Trump also contrasted himself with Democratic nominee Hillary Clinton on the issue of refugees, criticizing her plan to admit more refugees into the country. Trump said the current flows of immigrants and refugees into the country are too large to permit adequate screening, and said if elected, he would reduce those numbers.

To listen to Molly Wood’s full interview with Kimberly Adams about the speech, click on the audio player above