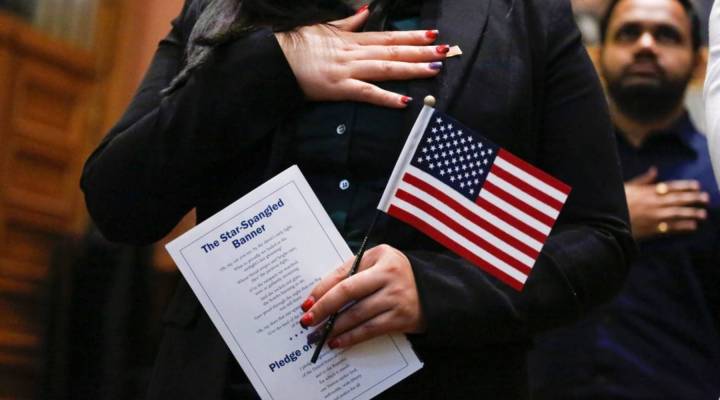 COPY
Candidates for US citizenship take the oath of allegiance during a Naturalization Ceremony for new US citizens at the City Hall of Jersey City in New Jersey on Feb. 22, 2017. KENA BETANCUR/AFP/Getty Images

Candidates for US citizenship take the oath of allegiance during a Naturalization Ceremony for new US citizens at the City Hall of Jersey City in New Jersey on Feb. 22, 2017. KENA BETANCUR/AFP/Getty Images
Listen Now

President Donald Trump and many congressional Republicans are pursuing policies to reduce legal immigration to the United States, with proposals to prioritize admission for highly skilled and well-educated immigrants over those with family ties to residents and by deporting undocumented immigrants currently living and working in the U.S.

Economist Aparna Mathur at the American Enterprise Institute warns that reducing immigration to the United States over the coming decade will starve the economy of workers.

“The baby boomers retiring is creating this deep hole in the workforce,” Mathur said. “U.S. birth rates are at all-time lows. We’re not seeing a huge amount of native workers entering the economy.”

According to the Bureau of Labor Statistics, immigrants — both documented and undocumented — made up 16.9 percent of the U.S. workforce in 2016, up from 13.3 percent in 2000. On average, immigrant workers are younger than native-born workers, and they have a higher labor force participation rate.

“In specific industries like construction and home health aides, and in the tech industry, there’s a huge demand for immigrants,” Mathur said. “If the administration does crack down on these workers, then employers will immediately start feeling the shortages. I don’t think employers are prepared to handle those shortages.”

In Portland, Oregon, where the local unemployment rate is 4 percent, the city’s Parks and Recreation department has been holding events at local community centers to welcome immigrants and refugees. A recent event was attended by 1,500 people and featured food and music, as well as tables with information about summer jobs for immigrant youth.

“A significant portion are immigrants. Many of the people have a tremendous amount of skills,” he said.

But Lynn Stephen, an expert on immigration at the University of Oregon and president-elect of the Latin American Studies Association, said the Trump administration’s actions on immigration are driving away high-skilled foreign workers.

“If you’re a middle-class person, say, from Buenos Aires or Mexico City — those are people who have choices about where to go,” Stephen said. “They might migrate to Spain, for example, or Italy where there are other options, or Canada.”

Trump has moved to shut down the Deferred Action for Childhood Arrivals program, which grants protection from deportation and work permission to so-called “Dreamers” brought to the United States without documentation as children.

If those Dreamers go underground or leave the U.S., their economic contributions might be lost. That could include the fledgling farm business that a 23-year-old immigrant from El Salvador named Ana is building in Eugene, Oregon, with her husband. Ana has U.S. citizenship; her husband, who is from Mexico, is a DACA recipient, and she asked that we only use her first name to avoid immigration problems.

“We have calves, goats and chickens, and farm-fresh eggs,” Ana said. “Since he [her husband] got DACA, we could actually go further with our business. We’re about to buy our first home.”