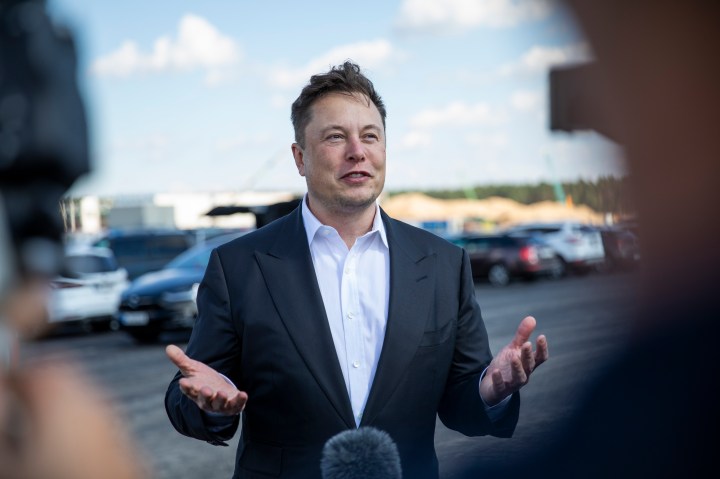 COPY
There's a disconnect between what Tesla CEO Elon Musk says and what he does, according to auto journalist Jamie Kitman. Maja Hitij/Getty Images

There's a disconnect between what Tesla CEO Elon Musk says and what he does, according to auto journalist Jamie Kitman. Maja Hitij/Getty Images
Listen Now

Governments incentivize carmakers to produce electric cars by giving them emissions credits for doing so – which they can turn around and sell to other carmakers that are struggling to meet regulatory requirements. For electric carmaker Tesla, these credits are a significant revenue source. In fact, Q2 of this year was the company’s eighth profitable quarter in a row but its first to be profitable if you exclude the money it made from emissions credits.

Jamie Kitman, an automotive journalist who wrote about Tesla CEO Elon Musk for the British magazine The Road Rat, thinks the company’s financial reliance on competitors’ failure to meet emissions requirements on their own is one reason the company may not be not as eager for the electric revolution to occur as it claims.

“I think Tesla is fairly credited with accelerating the drive to electric vehicles. But Musk has often claimed to be willing to share Tesla’s technology with other companies, and in reality, we’ve spoken to CEOs of major car companies who tell us that, when they approached Tesla, they were basically blown off,” Kitman said in an interview with Marketplace’s David Brancaccio.

David Brancaccio: So one of your points here in this piece is there is some, you have perceived, disconnect between Tesla’s purported mission to bring about the electric car revolution and what it actually does?

Jamie Kitman: Yeah, I mean, I think Tesla is fairly credited with accelerating the drive to electric vehicles. But Musk has often claimed to be willing to share Tesla’s technology with other companies, and in reality, we’ve spoken to CEOs of major car companies who tell us that, when they approached Tesla, they were basically blown off — and in fact, were told by Musk himself that: Why would you want to spend all this money making an electric car when, for considerably less money, you can buy all these regulatory credits from us that would exempt your need to make such cars, and would save you a lot of money?

Brancaccio: Elon Musk has said that out loud?

Kitman: According to my sources, who claimed to have been in the room, yes.

Brancaccio:  Now, to explain: if you are a green electric car company, zero emissions, you get to sell some of your wonderfulness to other companies that aren’t quite as clean, and you can make money off of that. That’s these clean emissions trading credits.

Kitman: Well, that’s true, and that’s really one of the things that funded Tesla through many lean years. I mean, in terms of selling cars, they weren’t making money, but in terms of selling, ultimately, probably billions of dollars of tax credits, they were really able to fund their enterprise.

Brancaccio: Another thing you heard industry complaints about is Tesla’s promises, over the years, to make its charging stations available to cars from competing companies — that never quite seems to happen?

Kitman: That’s true. Tesla’s charging network is probably its greatest competitive advantage, with the most stations and the fastest charge times. Musk is promised, for years, that he’ll share that with other car makers; they just have to ask and work out a licensing arrangement with him. But strangely, that’s never happened. There’s not a single carmaker who gets to use their charging network. Former Tesla employees have told me that, when they were approached by other companies to do it, that Tesla actually had no interest. One person told me that they were in the room when companies asked, and Tesla sort of changed the subject, and when they’d get back in touch to pursue it, [Tesla] wouldn’t respond to them.

Brancaccio: But you saw, there was a new promise in a tweet from Elon Musk this summer saying they’re going to make it easy for people with electric cars from competing companies to use its charging stations. He said something about it being simple.

Kitman: Right. It turns out it’s not that simple. And it also is the case that they’ve made similar promises throughout the years, none of which has come to fruition.

Brancaccio: Yeah, and I think the connectors don’t fit if you don’t have a Tesla; you can’t just slot it right in. So you’d need some kind of adapter.

Kitman: That’s right. And the technology is not presently available. So it is a promise that, as yet, is unmet. And based on the previous experience of promises that Elon Musk has made, one has to be sort of broadly suspicious about how soon, if ever, that will happen.

Brancaccio: You didn’t give the person’s name but you were mentioning a former North American CEO of what you called a major international car company making some of these complaints to you. I mean, not sour grapes, Jamie? Things like selling clean emissions credits is certainly not illegal — in fact, it’s encouraged by government rule.

Kitman: Well, it is encouraged. I think that the automobile industry largely has itself to blame and that Musk is a very clever operator who’s managed to use the societal concern that cars become cleaner to advantage himself and that is ultimately the story of capitalism and many successful businesses. I don’t think people realize the extent to which the government has, wittingly or unwittingly, done his bidding. But there’s no doubt that carmakers are troubled by Musk — not unlike the way they were troubled, earlier in the century, by technology companies and Silicon Valley companies in general, where you had companies where their stock valuations and their executive bonuses were tied to share prices that bore no relation to their current income streams. And that drove people in these heavy industries, like automobiles, nuts because, you know, here we’re making a profit; we have this massive infrastructural investment, and the stock market could care less. Whereas these people are being valued at multiples that are astronomical and bear no relation to how much money they actually make. So I think that they were very upset by the big tech companies, you know, the Apples and Microsofts first, and then Musk really brought that right to them. And of course, what they live in terror of is the day where those big technology companies like Apple get into building cars.

Brancaccio: Now, you have test-driven and reviewed many a vehicle in your time. You don’t mind these Teslas, do you? You kind of like them.

Kitman: No, yeah, they’re good cars. There are ways that, as we conventionally measure cars, that they’re lacking — certainly the construction of the bodies, for instance; the panel fit is poor by most conventional metrics. But as electric cars, they’re pretty good. And people often really love them; the people who have them don’t mind any of the shortcomings. There have been issues with sort of pervasive defects in the cars that Tesla has probably not dealt with in the way that the law would require of conventional manufacturers. And I think the tide with the new administration has turned somewhat. Investigations are being opened up, for instance, into Tesla’s claim — I should actually say Musk’s claim, since it contradicts their owner’s manuals and their legal departments — that the cars have a true autopilot function, when in fact, they really don’t. And there have been several accidents with some fatalities that attest to that.

Brancaccio: Did Elon Musk himself or Tesla have any reaction to what you were writing here?

Kitman: Well, I tried to reach them but Tesla closed down its press office a while back and so, generally, press inquiries do not go answered.

Brancaccio: We tried too; haven’t heard back yet either.