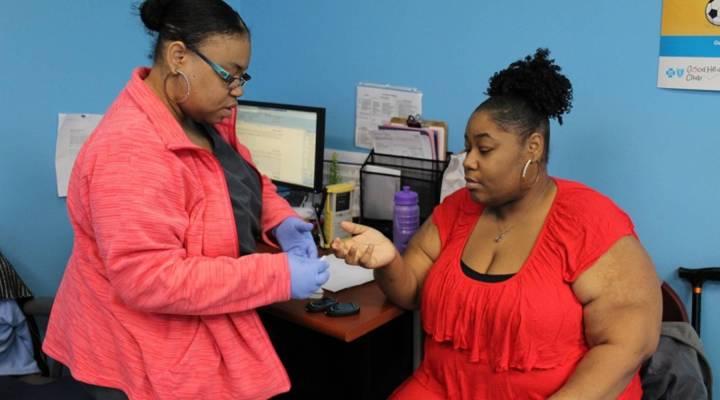 Nakeysha Douglas is a regular at a clinic run by Wayne State University Physician Group in Detroit. Every month she has to get a diabetes check up there. On her last visit, certified medical assistant Adenia Williams said Douglas’ average blood sugar levels were low.

“It’s like she’s reversing,” Williams explained. “So, she’s going back into the non-diabetic stage.”

Douglas has no doubt about what this means for her health.

Douglas is insured by Healthy Michigan, her state’s Medicaid expansion plan. She doesn’t work due to a disability, so these visits don’t cost her anything. Designers of the Healthy Michigan plan hope that affordable preventive care like this will lead to better health for Michiganders and drive down health care costs, but with the future of federal health care plans in doubt now that Republicans have signaled they want to scrap the Affordable Care Act, it’s hard to say what Michigan can expect going forward.

In this year’s State of the State address, Michigan’s Republican Gov. Rick Snyder touted the plan’s successes, and then he acknowledged its uncertain future.

“There’s going to be changes in health care,” Snyder said.

One possibility is that Medicaid will go to states as block grants. The governor said he looks forward to working with his “federal partners.”

“We need to let them know that Healthy Michigan is a model that can work for the rest of the country,” he said.

After all, it worked for a majority Republican state Legislature.

“It’s important to note that there was a very conservative blue print put on the Medicaid expansion in Michigan,” said Steve Fitton, who was the state director of Medicaid Services when Healthy Michigan was signed.

One reason the bill won some state Republican backing, according to Fitton, is that coverage is not free for everyone. It required “what folks referred to as ‘skin in the game,’”  Fitton said. Enrollees with incomes between about $11,000 and $16,000 a year may pay up to 5 percent of their income for services.

Fitton said there have been a few issues with the plan — like figuring out the best way to collect payments — but mostly there have been measurable positive outcomes. Hospitals are seeing a difference.

“What we’ve seen is an increase, statistically, in our Medicaid population and a decrease in our no-pay or self-pay populations,” said Dr. John Deledda, the chair for emergency medicine with the Henry Ford Health System, a southeast Michigan-based collection of hospitals and doctors’ offices.

Since Healthy Michigan was implemented, more emergency room patients are covered by insurance. Unpaid care in hospitals across the state has gone down by about half, and enrollees are also going to their primary care physicians.

But does the plan make fiscal sense for Michigan?

Dr. John Ayanian, the director of the Institute for Healthcare Policy & Innovation at the University of Michigan, and his group looked into the economic impact of the program, if it were to continue as originally conceived under the Affordable Care Act.

“Our recent study actually suggests the state comes out ahead by participating in the Medicaid expansion because of the savings to the state as well as the increased tax revenue,” Ayanian said.

But that’s only if the federal government allows Michigan and other states to continue their Medicaid expansion programs.

Fitton, now a principal at consulting firm Health Management Associates, said it’s possible the program could continue through block grants, but its success would still hinge on how much money the state would get from the federal governmen, and how much Michigan might have to pay out under a new plan.