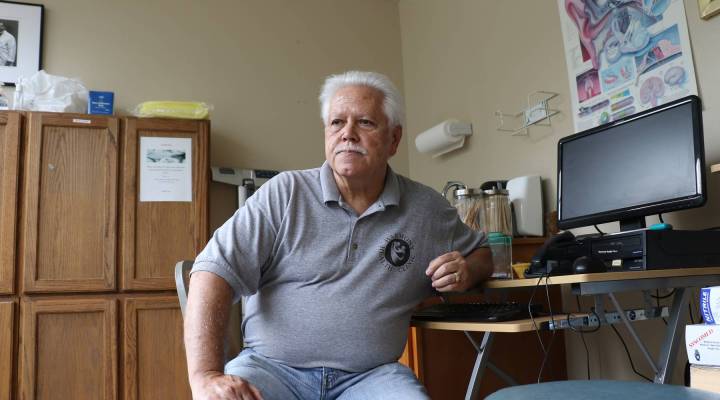 COPY
Eddie Pannell is the retiring executive director at Harmony Health Clinic. He thinks many patients who left the free clinic after the passage of the Affordable Care Act will return if Congress cuts Medicaid. Sarah Whites-Koditschek /Marketplace

Eddie Pannell is the retiring executive director at Harmony Health Clinic. He thinks many patients who left the free clinic after the passage of the Affordable Care Act will return if Congress cuts Medicaid. Sarah Whites-Koditschek /Marketplace
Listen Now

Willie Freeman works in the meat department at Edward’s Food Giant in Little Rock, Arkansas. He is 54 and has been insured through the Affordable Care Act for four years.

His job pays $9 an hour, too much for him to be on traditional Medicaid, which covers low-income people, and too little to be in the health care exchange.

But because Arkansas opted to expand Medicaid to fill the gap, Freeman was able to start going to the doctor.

“I had my leg, my left leg, was kept pain for some reason, like it had a burn in it. And I thought it was like my blood wasn’t going through my body right,” he said.

“I went to a doctor and they said it wasn’t nothing,” he said. “Like I pulled a muscle or something like that.”

Though he’ll only earn about $16,000 this year, he may soon make too much to stay on Medicaid expansion under the state’s pending plan, which would cap eligibility at the current U.S. Census Bureau’s poverty threshold, about $12,500 for a single dependent.

Willie Freeman, 54, outside his parents’ house in Little Rock, Arkansas.

Arkansas Gov. Asa Hutchinson is joining a handful of Republican governors around the country to pursue conservative modifications to their state programs in anticipation of major cuts by Congress to Medicaid. These are changes that had previously been blocked by the Obama administration.

He’s seeking federal waivers to the program that will include new work requirements and a lower income ceiling for recipients who wish to qualify for Medicaid expansion.

Hutchinson needs to make those cuts because Congress is looking at proposals to lower the federal Medicaid match rate to states. If his waivers are approved, the governor estimates about 60,000 people, like Freeman, would be able to get insurance through the marketplace. But whether Freeman would be able to afford health care outside of Medicaid expansion remains unclear. It depends on whether Congress retains some subsidies for low-income people.

Joe Thompson, health policy expert and CEO of the Arkansas Center for Health Improvement, said the governor’s plan is a middle of the road Republican compromise that emphasizes personal responsibility.

“I think it’s politically easier to say we’re helping people below the poverty level. I think it clearly saves the state money,” he said.

Health care advocates say the changes will increase premiums, raise uncompensated care costs for hospitals and make coverage too costly for some beneficiaries, who currently pay a $13 monthly copay.

The Arkansas Hospital Association has said that under the Affordable Care Act, its uncompensated costs for emergency room services were cut almost in half. That helped to keep some rural hospitals open.

Eddie Pannell, retiring executive director of Little Rock’s low-income Harmony Health Clinic, doesn’t think people shifted out of the program will be able to get coverage.

“That reminds me of a song, ‘Fairy tales can come true. It can happen to you,'” he said, singing the lyrics. “I don’t believe it.”

He said that for people hovering just above the poverty line, leaving the Medicaid expansion pool for the marketplace will mean higher deductibles and new penalties if they miss paying a bill.

“We’re seeing them now coming back to the clinic,” he said about clients who are insured through the marketplace but struggling to afford premiums. “They got in there, paid their first month premium, their car broke down, they’ve got to fix their car in order to get to work. And they didn’t pay their premium the next month, and they were kicked off the exchange.”

Under the Affordable Care Act, about half the clinic’s uninsured clients were able to get coverage.

In fact, Arkansas, after Kentucky, saw the greatest drop in uninsured residents nationwide since 2013, according to data by the Gallup poll.

Arkansas has seen more than $3 billion from Medicaid expansion over the last four years. The program’s continuation is now critical to the state’s budget plan.

The state plans to submit the waiver request to the federal Department of Human Services by the end of the month.