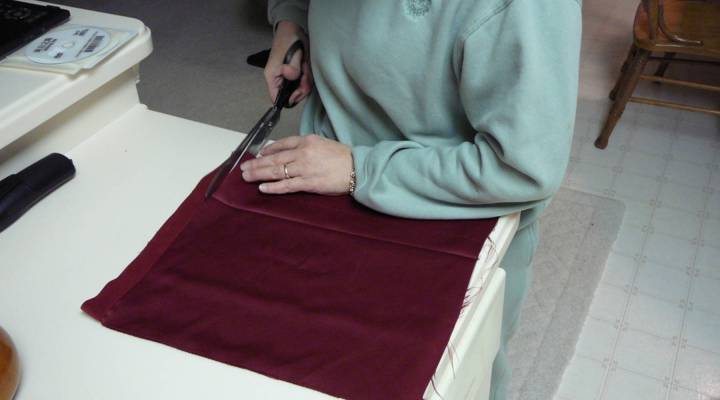 In Los Angeles’s garment district, bolts of fabric spill out of the stores and bins of cloth line the sidewalks.

“We can’t keep up with the orders. It’s more than tripled for us in the past four, five, six months,” he said, while  juggling a cellphone and a camouflaged walkie-talkie.

When it comes to the holidays, there’s probably no fabric more closely associated with the season than velvet.

That’s when “we think about dressing up and velvet has always been associated with luxury,” said Cynthia Washburn-Nester, vice president of fashion and trend at Belk, a chain of department stores across the south.

But even by holiday standards, it’s a sea of velvet out there. Stores are stocked with velvet bags, jackets, pants and one of the hottest items of the season: velvet booties.

“It’s everywhere,” said Melissa Moylan, creative director of womenswear for Fashion Snoops, a trend forecasting company. “From Valentino all the way down through Topshop and Zara,”

But this year, “velvet in itself has become a trend,” she said.

The number of new velvet products online is up by almost 200 percent from this November over last, according to Edited, a data analytics company that tracks hundreds of US womenswear brands.

Kevin Jones, curator of the museum at Fashion Institute of Design and Merchandising, gets the velvet craze, but, “I find in the history of fashion that velvet has never not had its moment,” he said.

Jones said velvet’s history is a little murky — but the fabric surfaced in Italy during the early Renaissance, reserved only for the royal and rich. It was made of silk and hand-woven in a process that was incredibly laborious.

A traditional piece of fabric is a “warp and a weft,” Jones said. Basically, it’s “a vertical and horizontal fiber that gets intermeshed together.”

Meanwhile, “velvet is a supplementary material…so you’ve that got that warp and weft, but then you have an extra line of material that’s woven in between those two and made lofty.”

Thanks to mass production, you don’t need to be rich to afford the fabric. Hand-made silk velvet can still cost hundreds of dollars a yard, but shoppers can grab synthetic velvet for less than $10 a yard.

The fabric is also becoming a lot easier to wear, said Washburn-Nester of Belk.

“We’re seeing so many new technologies applied to velvet: destruction, distressing, devore – where you’re burning out part of the velvet – so it’s not has heavy, it’s not as stiff. It’s softer,” she explained.

There’s no reason to keep velvet in the closet until the holidays roll around, said Simon Doonan, creative ambassador-at-large of the clothing store Barneys.

People shouldn’t be too precious about their velvet, Doonan said. These are casual times.

“The key is just to be very throwaway about it. Don’t worry if you slosh red wine or brie or any other holiday morsel onto your velvet jacket,” he said.

That is assuming you have a velvet jacket. Apparently the velvet holiday tradition is still with us.