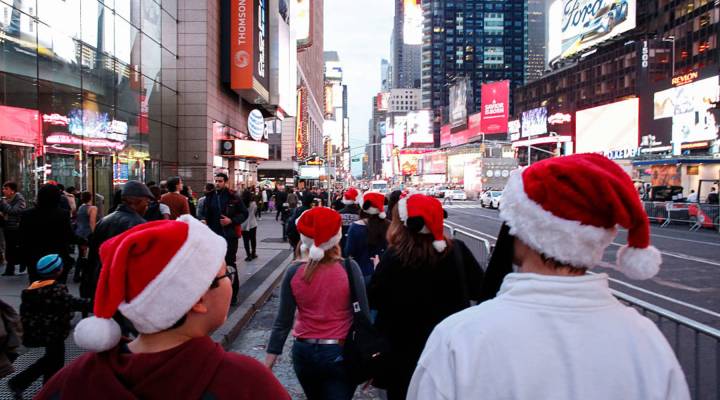 New York is a walking city, and this time of year its sidewalks are more packed than ever. Tourists converge on Manhattan for the holiday season. There’s the Christmas tree at Rockefeller Center, ice skating in Central Park, and checking out the holiday windows at department stores.

On a brisk late afternoon in midtown. Joline Mujica was leading a group of 20 people wrapped in coats and scarves on a tour of New York’s holiday windows. She works for a company called WindowsWear, and this time of year the tours are fully booked. We were on Fifth Avenue, about to brave the crosswalk. Mujica urged people to stick together.

She hustled her charges past throngs of commuters and tourists. A minute later we were in front of a jungle scene in a window at Bergdorf Goodman. Everything was emerald green. Monkeys made from plants and beads peaked out from the canopy.

“All of the holiday windows, on average for department stores, take a year to construct,” Mujica said.

A woman in the group asked what the store will do with the display after New Year’s.

“The very sad and short answer is, they throw it away,” Mujica replied.

None of the stores will say how much they spend on these six-week displays, but Mujica said it’s about a third of their visual merchandising budget.

It was cold, and we had a lot more to see. She told the group it was time to move on to Louis Vuitton across the street.

A few blocks away, Jack Hruska heads creative services at Bloomingdale’s. He said that even with more sales happening online, it’s worth it to hand-craft these intricate visual feasts months in advance.

“Why we do them is that are still thousands and thousands — in fact more people walk past our windows each day than lived in my hometown in Montana,” he said.

He wants to impress them. And you won’t find beaming Santas or cuddly polar bears here on Lexington Avenue. This year the theme is light, and the windows feature a series of chandeliers made by different artists.

“I think they’re successful when we get people to stop and look and interface with them,” Hruska said. “And now that’s more obvious to us because we see the Instagrams and the posts and the Twitters.”

All of which he said keeps the store’s brand in the spotlight, where it wants to be.

And of course stores want foot traffic. Many do a quarter of their yearly business between November and early January. Shawn Grain Carter teaches merchandising at the Fashion Institute of Technology. She said holiday windows “give you a way to be imaginative about what you might want to think about buying. And so windows – they’re art.”

And increasingly that art is incorporating technology, becoming more interactive. She said, take one of the windows at fashion emporium Barneys’ flagship store. It features South Park’s animated characters, and they talk — but it’s G-rated.

Carter says cheeky twists like that will appeal to plenty of customers as well as passersby.

Mickey Hackett is more of a traditionalist. In early afternoon, she stood in front of an opulent Bergdorf Goodman display, arm in arm with her old friend Jim Woods.

“This woman lives in Jersey!” said Woods. “She comes in just to see these windows, once a year…we’ve made it a tradition over the years.”

The two meet, they tour, then they talk about old times over a decadent lunch.

Shawn Grain Carter of FIT says many holiday windows hint at Christmases past, and bring a sense of nostalgia.

“You can look at what you like and think about things that you remember,” she said. “And I think that’s why the stores do it, because it conjures up these wonderful memories.”

And unlike so much else in New York, it’s free.

Correction (Dec. 21, 2016): A previous version of this story misstated the location of a window display. Both windows are from Bergdorf Goodman in Manhattan.