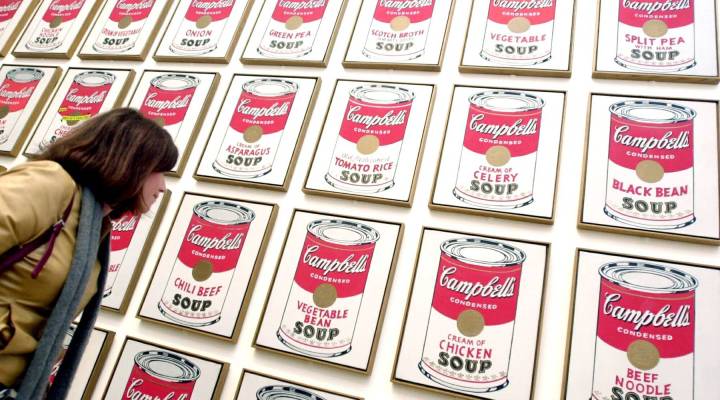 It’s no coincidence that avant-garde artist Andy Warhol called his studio The Factory. He embraced the commodification of art and called himself a business-artist, which as art critic Blake Gopnik points out, was suspicious to many.

“Usually people see that as a cover up, a way of getting away with selling out,” Gopnik said.

But Gopnik argues that rather than only wanting to make money from his artwork, Warhol’s famous works are a commentary on American consumption.

You can read more about Warhol’s 25 hour film and his perfume called “You’re In” (try saying that one out loud) in our conversation with Gopnik. Below is an edited transcript.

David Brancaccio: So let’s start with some examples. Warhol mixed business in a very interesting way.

Blake Gopnik: Yeah, I mean he’s best known of course to the general public for his Campbell’s Soups and his Marilyn paintings. But I think his most interesting work is actually the way he created something that he called business-art. He called himself a business-artist and usually people see that as a kind of cover up, a way of getting away with basically selling out. People see him as a sold out artist who got other people to make his art and his only goal was to make money. Well, he declared that selling out a work of art, a kind of art, this thing called business-art. That can seem far fetched. You could think, well, all he wants to do is make some loot, which he did like to do. But it’s weirder than that. Because every time he tried to make money, he came up with totally cockamamie business plans.

Brancaccio: When you say business-art, you’re not talking about the guy with the chain stores in the mall selling oil paintings to the passers-by. It’s the structure of the business was seen as a kind of work of art.

Gopnik: Yeah, Andy Warhol claimed that the act of being a good businessman could make you a different kind of artist, a new kind of artist. But, you know, when he tried to make money, the things people accused him of doing to make money, make no sense as moneymaking enterprises. He got involved with the Velvet Underground, a screeching, insane band that turned their amps up to 11. When, if he wanted to make money, he should have gotten involved with something like The Monkees. To imagine the Velvet Underground was a moneymaking scheme made no sense.

Brancaccio: Come on, I love The Velvet Underground. Their legacy endures, but OK, they weren’t mass market.

Gopnik: They were not quite mass market. They barely made a cent for poor Andy. Or how about the time he decided to make a perfume for sale and he called it “You’re In.” But of course you say it fast, what you’re putting on your body is a new kind of eau de toilette called “You’re In.”

Brancaccio: Urine. OK the penny just dropped. So he didn’t get rich off of that.

Gopnik: He did not get rich off of that. Or how about a movie guaranteed to be a box office smash the lasts 25 hours. Not exactly a great business plan.

A view of Andy Warhol’s artwork on Marilyn Monroe.

Brancaccio: But he was trying to say something about business as well as art.

Brancaccio: I was casting about for an example, a modern example, a contemporary example of business-art. I came up with Elon Musk, the Tesla guy. He has the side business selling flame-throwers. And I don’t think Elon Musk is going to be able to retire early based on the flame-thrower business but there is a performance art quality to that business line.

Gopnik: Yeah, for sure. I mean, one of the things about Warhol is that he’s vastly influential, and I would argue that his most influential idea is in fact the business-art idea. Now the question is is Elon Musk’s example of that any good? And I would say no, it’s it’s pretty low-end art. I mean, not everyone who makes a urinal is doing what Duchamp did when he called his urinal “Fountain.” You’ve got to be a great artist for these kind of ironic gestures. When you put quotes around something, people have to understand that you’re putting the quotes there. And being a famous artist helps that.