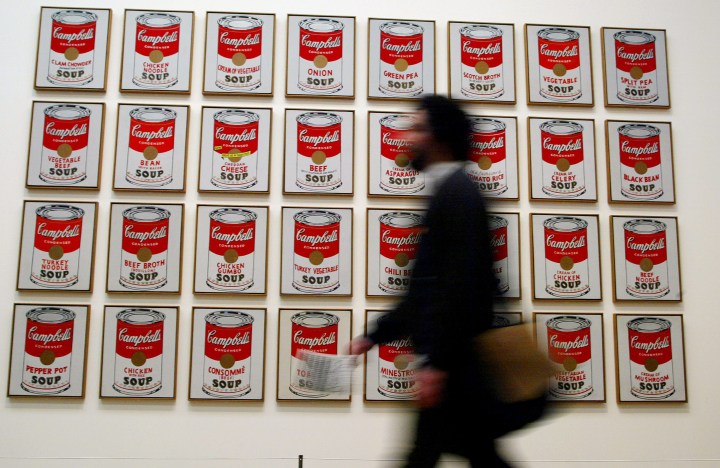 David Brancaccio and Rose Conlon May 5, 2021
Heard on:

David Brancaccio and Rose Conlon May 5, 2021
Heard on:

A pivotal moment in Andy Warhol’s career occurred 60 years ago this spring, when the artist displayed what would become the very first pieces of the eventually ubiquitous pop art movement — and they appeared not in an art gallery, but in the window of a Gunther Jaeckel department store in Manhattan.

Warhol had been working as a window dresser for years, and the pieces themselves were not particularly provocative — until the store display came down and Warhol insisted those very same commercial images had a place in the world of fine art.

“As window dressing, it would have all looked pretty normal — fun, light, lively stuff to get girls to buy clothes. It was only when it left the window and went into the gallery that people were shocked,” said Blake Gopnik, a contributor to The New York Times and the author of the comprehensive biography “Warhol.”

“People just saw them as pieces of commerce that were being put into galleries. And that really freaked them out,” Gopnik told “Marketplace Morning Report” host David Brancaccio.

Gopnik spoke with Brancaccio about how Warhol made the jump from commercial illustration to fine art — and why the move likely led to his massive influence in contemporary life, as analyzed by economists. Below is an edited transcript of their conversation.

The store window that birthed a movement

David Brancaccio: So 60 years ago, Andy Warhol had been doing window displays for department stores for years, along with a lot of other commercial art. But he did something in this store that was different, right?

Blake Gopnik: Yeah, he is invited to do the window dressing for the windows at Gunther Jaeckel department store. And the amazing eureka moment for him is when he realizes, “My God, I could take these props and turn them into fine art if I just show them in a gallery.” And of course, that was meant to shock, and it did shock. Because what happened is when he started showing these new works of, let’s call it now pop art, people just saw them as pieces of commerce that were being put into galleries. And that really freaked them out.

Brancaccio: I’m looking at a color photo of the window in question, and there’s a bunch of mannequins with the dresses that the store is trying to sell. But you have some poster boards up. One of them is a drawing, and part of it looks like the Pepsi-Cola logo. You’ve got, it looks like almost a silk screen of a nose job ad. And it’s that kind of stuff that Warhol was starting to frame as not just advertising dreck, but art.

Gopnik: Yeah, but what’s funny is that when someone walked by that Gunther Jaeckel window, they actually wouldn’t have been shocked by those props because commercial art had been doing stuff that looked a lot like pop art for the previous 10 years. In fact, Warhol’s own commercial art often looked like pop art. So as window dressing, it would have all looked pretty normal — fun, light, lively stuff to get girls to buy clothes. It was only when it left the window and went into the gallery that people were shocked. What was amazing was to say, “This is fine art. This is going to compete with Leonardo da Vinci and Picasso.”

Getting commercial art into galleries

Brancaccio: But it didn’t go right to the fine art galleries. It wasn’t like the gallery owners walked by this window and went, “This is the next big thing!” It was a process.

Gopnik: Yeah. We’re talking April 1961 when Warhol first shows these in a department store window. And it’s not until July 1962 that he has his first solo show of this kind of work. It wasn’t even this work exactly, it was his famous “Campbell’s Soup Cans.” So it takes more than a year for this transition to happen, and Warhol helps it happen. And other artists were doing it at the same time — Roy Lichtenstein, Claes Oldenburg. But I think you can really say that Warhol, at this moment in 1961, is the first person to really understand what pop art is going to be when it becomes a real artistic movement.

Brancaccio: And at when he gets one of his, if not his first, gallery show — this is the one in Los Angeles. I mean, some people like it but some critics just think it’s a big joke.

Gopnik: Yeah, there’s a great quote from Roy Lichtenstein, Warhol’s colleague in pop art. He talks about how it was actually getting too easy to make new kinds of art because everything seemed acceptable. And he said, and I’ll quote him, “It was hard to get a painting that was despicable enough so that no one would hang it … The one thing everyone hated was commercial art.” So guess what Warhol and Roy Lichtenstein did? They realized, hey, if we show commercial art, we can actually have impact. We can do something new.

Brancaccio: Blake, you were talking to David Galenson, the University of Chicago economist, who has a statistical analysis that finds that Warhol is the man when it comes to the most important modern American artists?

Gopnik: Yeah, I was talking to David Galenson just the other day. He’s done this study that shows that Andy Warhol, just in the 21st century, has overtaken Jackson Pollock and Jasper Johns as the artist who gets the most attention among scholars and in the auction market. So it looks as though Warhol has really taken off in the last 20 years as the artist that matters among Americans. But it turns out he’s also the artist that seems to matter most among world artists after World War II.

Brancaccio:  We should do all our art this way, you get the economist to run the analysis.

Gopnik: Maybe not, that’s my job. But it’s funny because I’m talking to Galenson, and he pointed out that you don’t have to like Warhol, but you have to acknowledge he’s important. You have to acknowledge that everyone in the culture is looking at Warhol and thinking about Warhol these days.