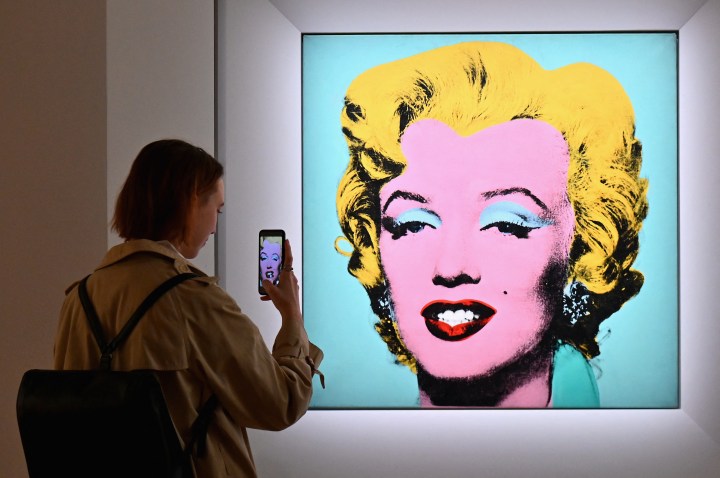 COPY
According to critic Blake Gopnik, it's not the price tag that's interesting, it's the "retread." Angela Weiss/AFP via Getty Images

According to critic Blake Gopnik, it's not the price tag that's interesting, it's the "retread." Angela Weiss/AFP via Getty Images
Listen Now

Update (5/10/22): Andy Warhol’s “Shot Sage Blue Marilyn” sold for $195 million on Monday, making the portrait of Marilyn Monroe the most expensive work by a U.S. artist ever sold at auction.

Next week an Andy Warhol silkscreen of Marilyn Monroe could become the most expensive 20th-century artwork to sell at auction. Projecting a sale price of $200 million, auction house Christie’s has compared Warhol’s 1964 “Shot Sage Blue Marilyn” to da Vinci’s “Mona Lisa” and Botticelli’s “The Birth of Venus,” calling it “one of the greatest paintings of all time.”

Art critic Blake Gopnik told Marketplace’s David Brancaccio that the portrait is important, but for a different reason.

“Warhol had already done his Marilyns two years earlier — so I don’t think you can call it innovative in the normal sense, at least,” said Gopnik. “But it matters a whole lot because by virtue of being a retread, it was an appropriation in the first place. And that’s what really makes Warhol matter, this notion of appropriation.”

David Brancaccio: I see the auction house is calling this an innovative portrait of Marilyn Monroe. No?

Blake Gopnik: Well, I guess you might call it that, except for the fact that Warhol had already done his Marilyns two years earlier, so I don’t think you can call it innovative in the normal sense, at least. He called these paintings, where he did retreads of his earlier, really innovative pictures, he called them “dead paintings.” So I think that this is actually a really great, important picture, and actually may deserve the $200 million dollars that Christie’s thinks it may get — but I don’t think this painting matters for any of the reasons that Christie’s is saying. They’ve pulled out all the clichés: that it’s an “untouchable image that transcends time and place.” Those are just the kind of clichés that Warhol just hated. He would have been appalled — not at the $200 million number, but at all the clichés that have been pulled out for this dead painting, this retread. But it matters a whole lot because by virtue of being a retread, it was an appropriation in the first place. And that’s what really makes Warhol matter, this notion of appropriation.

Brancaccio: That’s why the picture matters. But the retreading is throughout art, you’ve pointed this out. It’s essentially everywhere.

Gopnik: Yeah, I make a claim — that, I guess, is a little bit on the radical side — that appropriation is actually at the heart of the entire Western notion of fine art. That it begins around 1500, when a bunch of people said: “You know those religious pictures, those wonderful altar pieces that are meant to please God? How about if we take them out of the religious context and just look at them because we’re interested in them, we want to talk about them, we can’t figure them out?” That’s what fine art is all about. So it starts out at the very beginning of the modern Western tradition as being about appropriation. And that’s what Warhol latches onto and turns into kind of the heart of his entire practice as an artist. And that’s what makes him more than his subject matter, more than all the clichés about pop art. What really matters is his deep belief in appropriation, his deep belief in the retread.

With reporting from the Associated Press