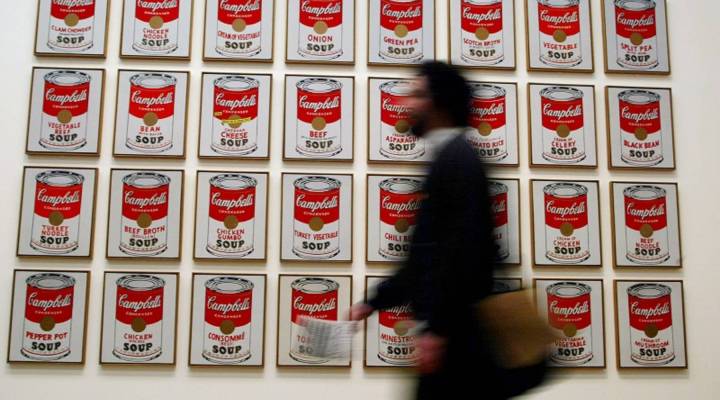 “You see, this whole wall here,” he said. “That was the space where we had the Warhols displayed.”

That is, until early morning April 7, when seven of Andy Warhol’s famed “Campbell’s Soup” can screen prints were stolen.

“Our reaction is one of shock and sadness,” Nelson said, adding that the Warhols were a source of pride.

The 10 prints in the museum’s collection had only been on view a handful of times since acquired in 1985 because works of paper are sensitive to light.

“You know, certainly it’s quite a blow to have something like this happen,” Nelson said, “not only due to the loss of artwork, but also due to the invasion of space.”

Andy Warhol’s classic soup can paintings date to 1962, and 250 sets of prints were made in 1968. Each has 10 soups, such as “tomato, black bean, onion, pepper pots, all kinds of different soups,” art dealer Monica Brown said.

The soup can prints sell for $40,000 to $45,000 each. Tomato soup, Brown said, is the favorite. Maybe it’s childhood memories, with grilled cheese sandwiches. One sold recently at auction for more than $100,000.

Who stole these Warhols is a mystery, but there is one strong likelihood.

“About 89 percent of museum thefts in the United States are inside jobs,” said Robert K. Wittman, a former senior investigator with the FBI’s Art Crime Team. For more than 25 years, Wittman has chased down paintings, prints and sculptures — sometimes going undercover.

Here, he said, there were signs the thieves were amateurs: They stole well-known Warhol prints, but they didn’t take the full set.

“First of all, they’re very identifiable. Secondly, you take seven out of 10, and that diminishes the value of the whole collection,” he said.

So it looks like they were opportunistic thieves — no mastermind here.

“The notion that this could have been stolen to order by some Mr. Big or Dr. No character, normally is not the case,” said “Turbo” Paul Hendry, who runs two art theft blogs, Stolen Vermeer and Art Hostage. “Especially something like this.”

Hendry knows his stuff. He started out as a con man going door-to-door, trying to buy artwork or antiques for less than their worth.

Stolen art often goes to a “trusted hand,” he said, someone who buys stolen goods for not a lot of money.

“So they would perhaps sell them for $10,000,” Hendry said. “Then the person who buys them for $10,000 maybe would then sell them to what’s called a criminal venture capitalist, who may pay $20,000 for them, wrap them up and put them away,” until interest dies down, he said, which could mean years. Other options: The works could be sold to a drug dealer or exchanged for narcotics.

Of course, someone in the know could lead the police to where the prints are — especially for a reward.

The FBI said rewards are considered “generally effective,” although there’s no real data. It’s offered $25,000 in this case. Hendry said that could be an incentive.

Springfield Art Museum officials are hoping their situation won’t be like what’s been described as the “holy grail” of art heists: the Isabella Stewart Gardner Museum in Boston, where $500 million worth of artwork has still not been recovered after nearly 30 years.