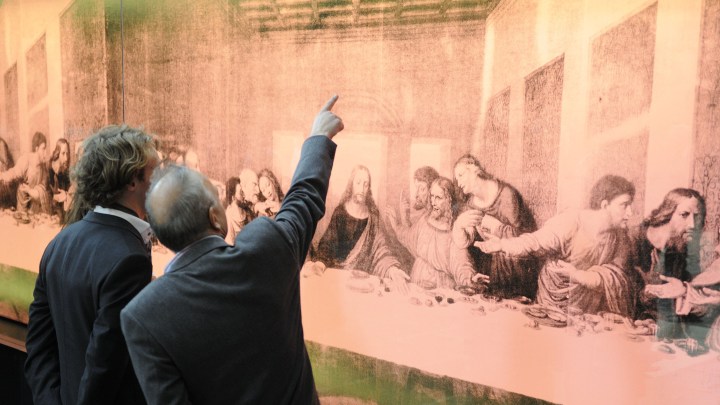 COPY
The Baltimore Museum of Art's plan to sell off pieces in its collection — including a silk screen of Andy Warhol's "The Last Supper," pictured above — was met with backlash from patrons and donors. Lex Van Lieshout/AFP/GettyImages
COVID-19

The Baltimore Museum of Art's plan to sell off pieces in its collection — including a silk screen of Andy Warhol's "The Last Supper," pictured above — was met with backlash from patrons and donors. Lex Van Lieshout/AFP/GettyImages
Listen Now

Early in October, The Baltimore Museum of Art announced it would sell off three pieces of art in its collection to raise funds and “expand its ongoing diversity and equity programmatic initiatives.”

The three works are Brice Marden’s “3,” Clyfford Still’s “1957-G” and Andy Warhol’s “The Last Supper.” Sotheby’s is scheduled to auction off Marden’s and Still’s works on Oct. 28, and there’s a plan to sell Warhol’s piece privately.

These moves have received backlash from patrons and donors, including two former board chairs who withdrew planned donations of around $50 million to the museum.

“Marketplace Morning Report” host David Brancaccio spoke with art critic and Andy Warhol biographer Blake Gopnik about the controversial decision and why, ultimately, this decision may end up hurting the public and future artists down the road.

David Brancaccio: Now, it’s not that weird for art museums to sell parts of their collection to buy new artwork?

Blake Gopnik: That’s right, it’s considered acceptable to sell something, especially if it’s minor, you really don’t need it anymore, in order to buy art that seems more central to your mandate. And that can include, you know, selling work by uninteresting white artists to get work by important Black artists who’ve been neglected in the past. That’s pretty much normal in the museum world.

Brancaccio: But this spring, when most of us were focused on pandemic lockdowns, an association of museum directors decides that maybe it’s also OK for museums to sell artworks and use that money for more operational things.

Gopnik: Well, this spring with the pandemic and ever since then, museums have been in a really hard place. They’ve been losing attendance like crazy, which means that if you charge for attendance, you’re losing money like crazy. So the Association of Art Museum Directors decided to open things up a little bit so that in this emergency if you desperately needed cash, and you were a museum, you could sell a few works, you know, just to tide you over for real emergency purposes. But that’s not what happened at The Baltimore Museum of Art. They don’t charge for admission, and they haven’t been hurt financially in a really big way by the pandemic. They just decided to use this opening to sell some work to achieve all sorts of normal kind of operating goals.

Brancaccio: Well, normal operating goals — they talk about fostering the cause of diversity and inclusion in their collection, but you’re saying they want to sell some of this art for other things?

Gopnik: Well, they want to sell about $55 million worth of art in order to fund better salaries for the museum guards, for instance, which is fabulous. There is no one who doesn’t think that’s a good goal. And they want to stop charging for special exhibitions so that more people can come to the museum and more kinds of people can come to the museum, and that’s great. No one is objecting to that. The thing is, that’s what you usually fundraise for, right? You go out begging, and you say, “give us some money so we can achieve these useful goals.” You don’t sell your most important works of art because you’re not really a museum if you don’t have great works of art on the wall.

I think this story is interestingly about kind of a new category of objects that Marketplace listeners don’t hear a lot about, and that is unsellable commodities. Once a work of art is in a museum, it’s supposed to be more or less unsellable. It’s supposed to be a new kind of object that’s so important, so wonderful, that it’s kept for posterity so that everyone who needs to see the thing, everyone who needs to see that amazing Warhol’s “The Last Supper” gets to see it because it’s on the wall of a museum. It doesn’t just pass from one rich private collection to another one at auction.

The prospect of more fundraising for The Baltimore Museum of Art

Brancaccio: So you’d prefer The Baltimore Museum of Art get out there and fundraise not sell the collection. But we have a pandemic here, right?

Gopnik: Well, we have a pandemic, but it’s said that the 1% or the 0.1%, have made something like, collectively, I think a trillion dollars in increased wealth since the pandemic began. So they got some money. It would be nice to imagine that maybe they even feel a little guilty for making all that money when other people are suffering. And that they might do something like give it to a museum, like The Baltimore Museum of Art, that wants to do good for the larger population, for underserved populations. It should be possible to fundraise for that money, and that’s what’s normally done. Because, by fundraising, you’re not getting rid of the heart of your institution, you’re not breaking down the fundamental mission and mandate of a museum.

Brancaccio: Now, this has gotten pretty intense at The Baltimore Museum of Art, in particular. They’re reporting that some big donors are now thinking of changing their mind because they don’t like this notion of selling off part of the collection?

Gopnik: Yeah, two former board chairs have said that the $50 million that they claim that they were going to give to the museum there, they’re not going to give anymore. And it’s not hard to imagine that this could have a knock-on effect that, you know, selling off major works of art that the museum has in its collection won’t please future donors a whole lot, especially donors of art. I mean, it’s hard to imagine someone giving their, you know, their prize Picasso thinking, “Yeah, I’m giving it to the museum but maybe in 10 years, when they don’t like Picasso so much anymore, or when they want to fund more energy efficient light bulbs, they’re going to sell the Picasso, and it won’t be, in a sense, my gift anymore to the museum. It’ll just be out there on the market.” So this could really open a Pandora’s box for that museum and for any museum that sells works of art to fund normal operating expenses.

Brancaccio: Blake, you’re the Warhol expert. You wrote the book. When you learned The Baltimore Museum of Art, among other works, wanted to sell Warhol’s “The Last Supper,” what was your reaction?

On Warhol’s “The Last Supper”

Gopnik: I was pretty surprised that they’d want to sell such a major work. And it’s major partly because it’s one of the very last paintings he painted just before he died. He was actually in Milan showing these paintings when he got hideously sick and died just shortly thereafter. And, you know, it’s a major, really complicated, really interesting work of art, because it seems to be either a worshipful nod to Leonardo [da Vinci’s] “The Last Supper,” or he’s making fun of Leonardo and the whole notion of the perfect work of art. And he’s either nodding to the importance of religious art or he’s making fun of that. So it’s a work with lots of complicated content.

I like to think of art museums as an awful lot like public libraries. They’re where you go to look at art in just the way that a library is where you go to read a book. And, you know, you don’t need a librarian telling you what to think about the book, they just have to make it available. Well, I think that’s the fundamental goal and responsibility of museums, is just make the art available. And just as if you take “War and Peace” out of the library, a big chunk of the culture is gone. You can’t talk about “War and Peace” anymore. Well, if you take Andy Warhol’s “The Last Supper” out of The Baltimore Museum of Art, a big chunk of visual culture is just gone. People can’t see it anymore. They can’t learn from it. They can’t rival it. They can’t see it as something they need to deal with. And to imagine that the young artists in Baltimore won’t be able to see that work anymore? That’s incomprehensible to me.