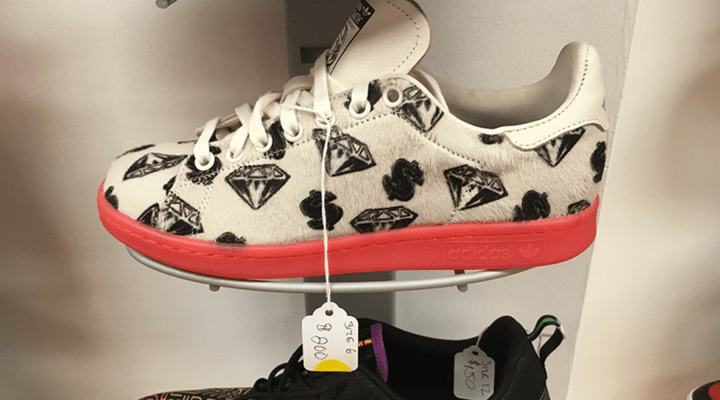 COPY
Sneakers on display at Sneaker Pawn, The Bank for Sneakers in New York. Sally Herships/Marketplace

Chris Burns used to be a college English professor. Then, in 2011 he opened his Amazon store, Arch-USA, selling limited edition sneakers.

A big part of the passion for limited edition sneakers is fueled by celebrity. Behind the velvet rope at Sneaker Pawn.

Prior to that, Burns had sold sneakers on the weekends, at flea markets. He also had his own shoe company and would wear his designs to class. “The students would be like, ‘Aw Professor Burns, you fresh.’ And I’d be like ‘Yeah, you know.’”

Burns said it’s not kids buying high-priced sneakers, either. You may develop your taste when you’re a kid, but you can only afford the shoes as an adult.

Ray Islam checks out the sneakers at Sneaker Pawn.

Sneakers aren’t just footwear. For some, they’re also investments. And some savers invest their hard-earned dollars in their footwear.  Just like with a Chanel bag, hold on to a pair of high-end kicks long enough and the price goes up.

That’s part of the sneaker strategy employed by 29-year-old Ray Islam. He grew up in Brooklyn and the Penny’s he’s wearing are the whitest, most sparkly clean sneakers you have ever seen. Islam said he buys for love, but he just graduated from medical school. He uses his sneakers as a rainy day fund.

Sneaker Pawn, the Bank for Sneakers has just relocated from Harlem to Manhattan’s West Village.

He maintains an online web presence where he sometimes sells his shoes under the name Ray’s Kicks, but he said it’s far from full-time work. Instead, noted Islam, there’s another kind of sneaker investor on the market.

“There are other people, where this is their primary source of income,” he said. “For some people this is a real investment.”

To see that kind of investor in action, Islam and I head to Sneaker Pawn, which has just relocated to West 14th street in New York’s West Village from Harlem. That’s where we run into Perryante Biffle. Biffle buys and flips sneakers. He goes by Pro Knockerz on Facebook, where his page is filled with photos of the shoes he’s selling.  And the shoebox he’s just brought into the store holds a pair of limited edition Air Max Corks from Nike’s Soho Store.

Perryante Biffle (ph) shows off a new release from Nike.

A closer look at Nike’s new cork sneakers. It’s a limited edition and each pair is numbered.

“They just came out about two hours ago,” he said. “That was like my day. I was there from sun up to sun down.”

The side of the cork sneakers are marked with a number — 80/100. There are only 100 pairs. Nike says the sneakers retailed for about $200 each. But they’re already sold out and selling online for up to $800. And here’s where things can get a little awkward. Resellers like Biffle can get a bad rep. Ray Islam tries to explain,  but he’s hesitant. “I don’t want to offend anyone, he said. “I try to stay Switzerland.”

But at the same time, he admitted, when you look at the business of reselling, it’s hard to argue with the math. Islam said imagine you had the opportunity to buy a pair of Yeezys, Kayne’s sneaker line from Adidas, that you knew you could flip to make a quick profit.

“Who’s not gonna want to do that?” he asked. “Who’s not going to want to spend a day in line and make $450?  I could never hate on the hustle and hard work of someone else.”

While we’re looking around the store, a teenager comes in. He’s hoping to make a trade. Five pairs of Jordans for one pair of Yeezys. But the owner’s answer is no. Maybe he’ll be able to afford a pair one day.