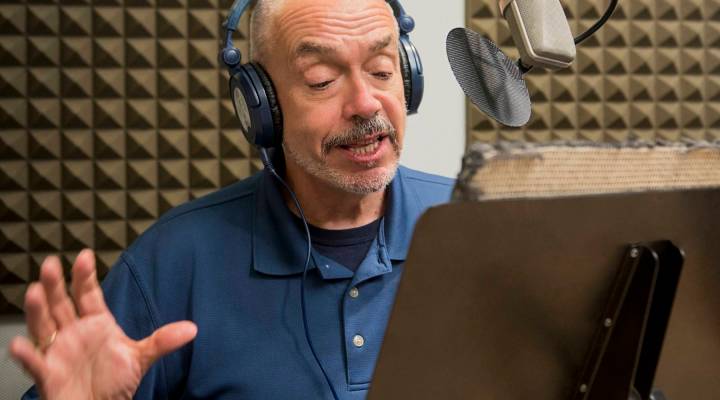 COPY
Wally Lamb in the recording studio, laying down some Voice Overs for the "I'll Take You There" Metabook. Kyle Makrauer

Wally Lamb in the recording studio, laying down some Voice Overs for the "I'll Take You There" Metabook. Kyle Makrauer
Listen Now

Storytelling has been around for many, many years. And the ways in which stories are told has constantly changed over time. More recently, books can be found in the form of an app. Sounds strange, but it’s kind of cool.

Wally Lamb, New York Times best-selling author, is stepping foot into this new digital territory with his new book, “I’ll Take You There,” exclusively as an app for Apple, before it comes out as a regular ol’ book. This will be the first original book-app produced by the company Metabook.

In addition to the written text of the novel, the Metabook version includes a full-cast audio dramatization of the book, an original soundtrack, short films, photo gallery, and more. Artists, including Elizabeth Banks, Kathleen Turner, and Jeremy Sisto collaborated in the making of Lamb’s Metabook, “I’ll Take You There.”

I look at the way my millennial aged kids consume media. You know, when they come home for Christmas, they’re in their early 30s now, but when they come home for Christmas or whatever, they’re watching ESPN, they’re on their iPod, and they’re typing electronically or reading something on a tablet. So, you know, a lot of people talk about millennials having shorter attention span. I think it’s just a different way to consume.

On the future of books:

I don’t particularly worry about the future of books. I think publishing is maybe evolving and maybe mutating somewhat. But, you know, stories have been with us since the pre-historic days. Cave men and cave women sat around and amused one another. So, storytelling, whatever the form is, I think will continue and be okay.

On his favorite part about working on a Metabook:

I have a visual orientation when I’m writing. It’s probably because when I was a kid growing up in the 1950s, I was a TV kid and I was always drawing. I wasn’t particularly drawn to words so much as images. So, I think being able to work with Benjamin Alfonsi, the artistic director, on things like the cover and some of the imagery that’s embedded in the story – that was the coolest thing for me.