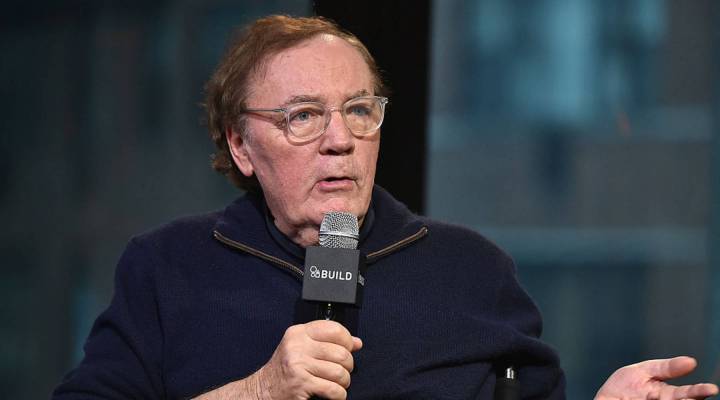 James Patterson may have pulled inspiration from a very public disagreement he had with online retailer Amazon for his latest novel. In “The Store,” written with Richard DiLallo, two married writers try to expose an online retailer that has taken control of many aspects of everyday life.

Marketplace host Kai Ryssdal talked to Patterson about his new book. They discussed its themes and resemblance to Amazon, a company that Patterson’s publisher has fought with over e-book prices, and Patterson’s next collaboration, with former President Bill Clinton. The following is an edited transcript of their conversation.

Kai Ryssdal: Why this book now? I mean, I’d figure a guy who does books for a living would not be interested in maligning a big, fat bookstore.

James Patterson: I’m not maligning a big, fat bookstore. I’m maligning the idea of monopolies in the country. And in particular, I think it’s a problem when it threatens publishing, because I think that books are really important in our lives, especially books that we can’t live without. And I think right now the people that are best equipped to put out serious books are publishers. That may evolve over time, but right now publishers are pretty good at finding those books and paying to have them done and making sure that people are aware that they exist.

Ryssdal: I’m going to guess you’re not worried about James Patterson, because you’re doing fine, but you are a guy who could just get Jeff Bezos on the phone, right? And you could say, “Jeff, look.”

Patterson: I don’t know. I mean, I could.

Ryssdal: Oh come on, of course you could.

Patterson: He probably would read a letter if I sent one, I don’t know. I mean, I don’t. I met him once.

Patterson: It was fine. I mean, what I said at that point was that the traffic at bookstores at that point was down about a third because a lot of people had gone over to e-books. And I said, “The problem with that is that a lot of these people have kids. They’re not going into bookstores anymore, and their kids have not made the switch to e-books.” And I said, “That’s a problem, because there are a lot of households now where Mom or Dad used to go to the bookstore, bring the kids, so they were getting books to the kids.” And I said that, you know, he was in a position to change that, even if it meant a lot more kids reading on e-books. And you know, he said at the time, “I’m on it.” I don’t know that I’ve seen evidence of that, but you know.

Ryssdal: Well, you and I have talked about this before, your interest in getting kids and people outside traditional sort of mainstream novel readers into books, right? We talked about bookshops, we talked about a bunch of other stuff you’ve done. Do you take any heart from the fact that Amazon now has actual brick-and-mortar stores in some places?

Patterson: Not particularly, no.

Patterson: No, it’s kind of neutral. I mean that they are replacing independents and, well, Borders.

Patterson: I don’t think it’s necessarily a big step, or a good step, but it might be. We’ll see where it goes.

Ryssdal: Can’t let you go without asking you about this thing you got going with Bill Clinton. You’re working on a book with him, you said before we turned the microphones on.

Ryssdal: OK, a novel. Who called who? Did you call him or he called you?

Patterson: We have the same agent. I had met him before. We had a really great meeting, just shooting the breeze. And I think we got along pretty well, and our mutual agent, who is a lawyer in Washington, brought up the idea. And it really sounded exciting to both of us. And I mentioned the last time we were together, the president and I, it was in his place in Chappaqua. And we’ve had several of these three-, four-, five-hour work sessions, and about two hours in and for whatever reason, it just washed over me, and I’m going, “Damn, I’m sitting here talking to Bill Clinton!” And it’s amazing, whether you’re Republican or Democrat. And one of the interesting and important things for people to think about a little bit with respect to what’s going on now in the world and how we demonize the left, demonize the right, depending on what side we’re on. Clinton, now, he’s really good friends with the Bushes, both of them, both Bushes. And they will go and they will do good things together. And I think a lot of people in this country, if we could get over this demonizing the other side, you know, let’s get in there and once the elections are done, let’s go in there and do stuff. There’s a lot of stuff that needs to get done.