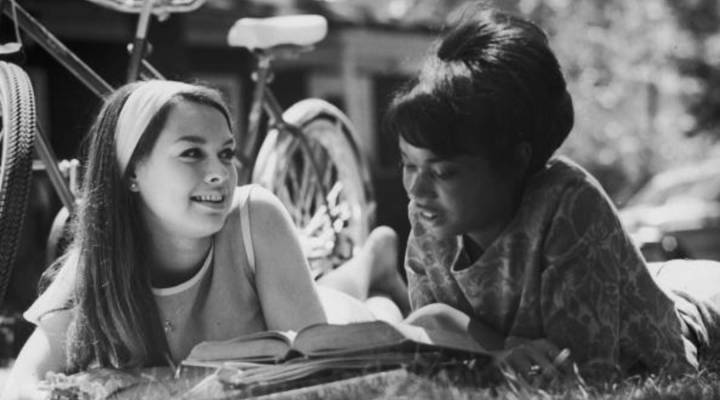 Two young women reading in a park, U.S.A., circa 1970. Keystone/Hulton Archive/Getty Images
Make Me Smart With Kai and Molly

It’s been a long year for the news. Sometimes the only way to stay sane is to slow down and step away from the 24-hour news cycle long enough to finish a book. And reading together leads to the sometimes lofty but always passionate philosophical conversations that the day-to-day news just doesn’t have time for. Kai and Molly kicked off the Make Me Smart book club this year with Jonathan Haidt’s “The Righteous Mind: Why Good People Are Divided by Politics and Religion,” and continued on with “The Man in the High Castle” by Philip K. Dick. Those books provided such quality conversation that we’re squeezing one last book in before the year wraps up — and it’s up to you to choose what’s next.

“March: Book One” by John Lewis and Andrew Aydin, illustrated by Nate Powell

Listener Patrick Shapland seconded Molly’s motion that the next book be a graphic novel and proposed the first volume of U.S. Rep. John Lewis’s visual memoir of the civil rights movement. Lewis helped plan the March on Washington, and he collaborated with his staffer to write this account, which time travels from Bloody Sunday — when Montgomery, Alabama, police attacked peaceful protesters — to the eve of Barack Obama’s inauguration. The book came out in 2013, around the time that the Black Lives Matter movement began with the acquittal of George Zimmerman, and the New York Times’ commented on its importance in clearing up common misconceptions about the civil rights movement: “The civil rights legacy has become a sort of catechism. Its images of nonviolent confrontation have been blurred into a vision of dignified compliance, and its contentious activism into the predestined evolution of the American Way.”

In a year where we’ve seen a slew of white supremacist uprisings (and little condemnation of such events from the White House,) police brutality protests that have polarized the NFL, and a feud between Lewis and the president, his story feels more relevant than ever.

Three volumes of the graphic novel have been published, but we’re just going to read “Book One,” which clocks in at a lean 128 pages. But they do sell all three in a nice three-book collection if you’re so inclined.

This is true story about meeting a man who lives off $10,000 a year and seems perfectly happy (sounds like science fiction to me.) The author found this man, Erik Gillard, in Vermont (of course) and the experience sent him on a quest to “understand the true role of money and mindless consumerism in our lives.” In an interview, Hewitt describes one of the epiphanies he had getting to know Gillard: “Erik is the most innately generous person I’ve ever met. We went mushrooming for morels. Now, mushroomers are generally a secretive lot, but Erik took me to the best spots. To him these are things to be shared. When you get stuff for free or because of the abundance of nature, it’s such a rush. Who doesn’t like being able to forage a meal? That’s free food!”

The book’s subtitle, “How I Quit Worrying about Money and Became the Richest Guy in the World,” sounds a lot like the title of Kai’s Marketplace tour in 2014, “How I Learned to Stop Worrying and Love the Numbers.” Except the richest guy in the world part. This book was suggested by listener Kendall Harris.

“A Paradise Built in Hell” by Rebecca Solnit

From the depths of Solnit’s brilliant mind comes another nonfiction pick, a book about how people react in the face of disasters, natural or otherwise. She delves into five disasters — the 1906 earthquake and fires in San Francisco, the Halifax munitions cargo ship explosion of 1917, the Mexico City earthquake of 1985, the events of 9/11 and Hurricane Katrina — and explores why, amid all the pain and sorrow, there can also be a sense of joy and renewed purpose. Solnit, an essayist and social critic, is a treasure, “the kind of rugged, off-road public intellectual America doesn’t produce often enough,” according to the New York Times.

If you haven’t had a chance to get into Solnit’s vast catalog, it also includes the essential essay “Men Explain Things to Me,” often considered the impetus behind the coining of the word “mansplaining.”

“Prisoners of Geography” by Tim Marshall

Two of you, Chris Day and Suzanne Cunneff, suggested this book, which uses maps from ten crucial regions as an entry point for exploring the geopolitical strategies of world powers. The Washington Post wrote about the book and geography’s ability to shape politics, but also how it’s been ignored by world powers:

We’re told that geographical factors often explain the distribution of and relationships between nation-states: The Himalayas have kept China and India apart, the interlocking rivers of western and central Europe have kept those countries connected, the lack of navigable waterways and the presence of dense jungles have kept sub-Saharan Africans separate from one another and the outside world. Yet we’re also shown that Americans managed to settle, conquer, integrate and defend a nation spanning the Appalachians, the Mississippi River Valley and the Rocky Mountains despite the presence of significant imperial competitors; that Korea, despite cultural, historical and geophysical unity, is starkly divided into hostile states that have been technically at war for seven decades; and that the ethnographic settlement of east-central Europe defied geographical logic, making for a messy map and an even messier 20th-century history. Geography, it seems, is a rather low-security prison.

This was one of the best books I read this year. It’s a novel about a pair of migrants, Saeed and Nadia, who fall in love and leave their unnamed war-torn country to live as refugees in a series of places around the world.

In a time when building giant walls along borders is becoming popular again, Hamid subverts the border with a bit of magical realism and the motif of the door: “doors that could take you elsewhere, often to places far away.” In the book, the long, treacherous journey most refugees face is transformed into a instant.

Jia Tolentino writes in the New Yorker that “Hamid rewrites the world as a place thoroughly, gorgeously, and permanently overrun by refugees and migrants, its boundaries reconfigured.” She quotes Hamid: “The only divisions that mattered now were between those who sought the right of passage and those who would deny them passage.”

“A Wrinkle in Time” by Madeleine L’Engle

And finally, Molly really wants to read this. It’s a classic young adult novel, which is going to be a major motion picture in 2018 directed by Ava DuVernay, who is the person we most want interviewed on this program. So I’m gonna pull a Kai here, and say VOTE FOR THIS.

Okay, people, it’s up to you: vote here!