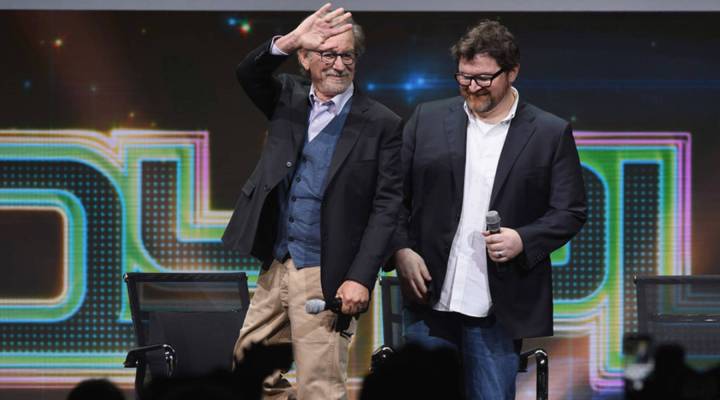 “Ready Player One” opens in theaters this weekend, but the story started out as a novel. It’s set in a dystopian future where people spend more time in a virtual world called the Oasis than they do in the physical world. The book is chock full of pop culture references from the 1980s and ’90s, as is the movie version directed by Steven Spielberg. Marketplace Tech host Molly Wood spoke with Ernest Cline, the author of the book and a screenwriter on the film, about whether he thinks we’ll eventually spend all of our time in virtual reality. The following is an edited transcript of their conversation.

Ernest Cline: Yes, I do, and I think it’s actually happening a lot more quickly than I predicted in my novel. In my mind, it seems like the inevitable end of the evolution of video games: computer simulation goes from as rudimentary as we can create when we first invented it to becoming photorealistic and indistinguishable from reality. There’s nowhere else for it to evolve. So I think that’s where we’re headed, and it seems to be happening extremely fast.

Molly Wood: That’s funny, because I was going to ask if you thought it would take until 2045 to get that good. But do you think even since 2011 or so to now?

Cline: Yeah, not to be self-aggrandizing, but it seems like in some ways, “Ready Player One” is becoming a self-fulfilling prophecy because of the publication of the novel. Right at the time that it came out was the same summer that Oculus Rift was invented and that company was founded, and because of that, as soon as my novel was published, it was immediately recommended to everybody who was working in virtual reality at the time. They’ve since told me that they still give out copies of the novel to everyone who comes to work at Oculus as inspiration to work in virtual reality, which is really flattering, but also I think just a part of it is luck and timing in that I wrote this novel imagining virtual reality right at the moment when our technology finally caught up with the idea.

Wood: The movie certainly has more of a message, I think, about unplugging — the importance of the real world and of disconnecting. We’re now in the middle of a conversation about tech addiction and going too far. Was that deliberate?

Cline: Yes, it is a theme that’s explored in the novel. The last line of the novel is about unplugging and the protagonist realizing that reality is the only place you can find true happiness because reality is real. And so Steven [Spielberg] took it a bit further by having them actually shut the Oasis down for a couple of days a week, but that just drives the theme of striking a balance that’s in the book closer to the forefront. But that was always my intention. I don’t think the internet is a bad thing, and I’m fascinated by the way in which it’s a communication tool but we oftentimes use it as a way to not communicate to the people who are right around us. You have to find a balance in your life between fantasy and reality because both are necessary elements of being a happy person.

Cline: There are a few million Easter eggs.

Wood: Not just the ones I get to look for and pause, you know. I mean the secret kind?

Cline: I don’t even know all the Easter eggs in this movie. Steven doesn’t either because [Industrial Light and Magic] and Digital Domain, who did the Oasis and the real world special effects respectively, they each snuck Easter eggs in without telling us. Steven only spotted a few of them at the last minute, so I think once the Blu-ray comes out, we’re all going to be going through it frame by frame to find all the Easter eggs, but I don’t know if any of these Easter eggs will lead you to fame and fortune.