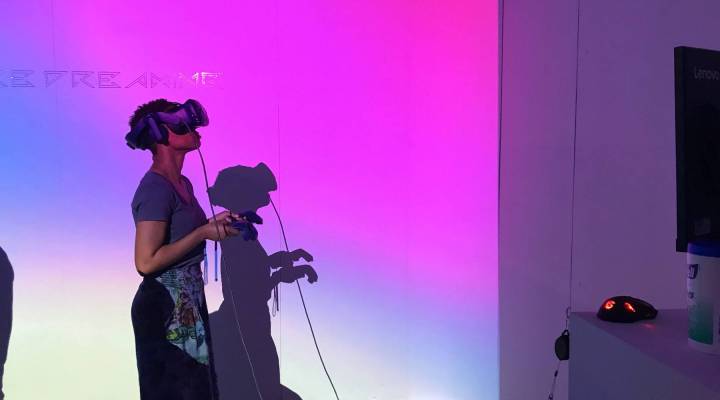 The Tribeca Film Festival, which is underway in New York, features more than 30 immersive movies, or as the organizers call them, “experiences.” The goal is to introduce movie fans to new ways of watching a film and to give other filmmakers ideas for how to make immersive stories.

Oculus, which makes the Rift headset, brought its first production to Sundance back in 2015. But virtual reality films are still far from mainstream. That’s partially because watching them involves a lot of stuff.

For example, for “The Key,” which is having its world premiere at the festival, users wear an Oculus Rift headset and a sound collar, and interact with a live actor (who also keeps them from bumping into walls).

“I think VR is an incredible medium to create memories,” said Celine Tricart, director of “The Key,” a dreamlike work that aims to convey a refugee’s experience. “That made [the technology] perfect for this story, because we want people to feel like they’ve lived through the journey themselves.”

But Tricart admits that for VR to take off, the headsets have to get cheaper and people have to, you know, want to put them on.

“I think people are a bit afraid of the tech,” Tricart said. “My parents for example — I had to be very insistent, like, ‘You need to learn it.’ ”

“Festivals play an important part in the ecosystem of introducing the work to audiences,” said Loren Hammonds, a Tribeca curator. The festival is a way to bring an audience to VR, especially those who might not otherwise seek it out. “It’s so important to get eyes on this work,” he said.

Think of it as part of a long tradition of getting audiences used to innovations in film. For example, when Thomas Edison’s movie “The Great Train Robbery” came out in 1903, motion pictures were very new. And people didn’t even know how to react to an actor breaking the fourth wall.

“George Barnes, who was the star of The Great Train Robbery, turns toward the audience, pulls his gun, looks at the audience and pulls the trigger,” describes film historian Marc Wanamaker. Then, someone in the audience stood up, and shot back.

It worked out in the end. “The Great Train Robbery” ended up being a hit. VR? Still waiting for its blockbuster.

There’s an interesting piece in Wired about the Tribeca festival and these big immersive installations they’re trying out — with the live actors. It suggests that maybe the future for VR movies is actually more like a museum piece, a real-world experience where you enter a virtual world (instead of entering a virtual world alone in your basement with a $500 headset).

Wired also has a story from earlier this month about not mixing weed and virtual reality, which seems like a good public service announcement.

And Facebook announced Tuesday that it’s releasing its standalone Oculus headset — the Oculus Quest — on May 21. The Quest needs no computer or game console to operate, costs $400 and will launch with over 50 games.