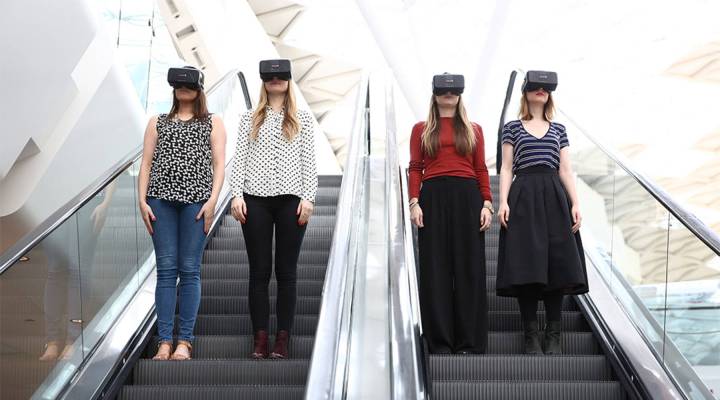 Virtual reality is the technology that keeps on promising. In the last decade, the promise has seemed so much closer. Facebook even dropped $2 billion on the VR technology company Oculus in 2014. Blake Harris is the author of “The History of the Future: Oculus, Facebook, and the Revolution That Swept Virtual Reality.” Host Molly Wood talked with Harris about how Oculus and most virtual reality tech has kind of stalled. The following is an edited transcript of their conversation.

Molly Wood: Three years ago, it seemed like everyone was going to have an Oculus headset. Where are they now?

Blake Harris: They’re in the top two in an industry of two, so that’s commendable. At least they’re in the industry, but certainly not where they expected to be. As part of my research, I ended up spending three and a half years researching and reporting this book. I was going over an email from Mark Zuckerberg to the Oculus CEO Brendan Iribe from a month or two before they acquired them, and Mark was saying that he estimated there would be 50 to 100 million VR headsets about five years from then. We’re almost at the five year mark and there certainly are not. There’s probably 1 or 2 million VR headsets out there. That’s one-twentieth of what the expectation was.

Wood: Is it a book about how having the good technology is not enough?

Harris: Having the best technology is not always a winning formula. Expectations is a big part of it. Messaging is a big part of it, too. I think the backlash to the acquisition of Oculus by Facebook is a good indication of how poorly Oculus handled that messaging and how the VR community felt about Facebook being involved. All technology is intimate, but VR is incredibly intimate. It’s on your face. It can track your eye movements. There’s cameras in your house. Facebook being involved in this was really unnerving to a lot of people.

Wood: Let’s stare down that hard reality that the tech maybe is just way harder than anybody gives it credit for, and that it was ultimately a lack of software and a lack of truly immersive experiences and motion sickness. Are you bearish or bullish on virtual reality overall?

Harris: I’m still more bullish than ever. Part of that is emotional. When people take off the virtual reality headset after their first demo, so many people I know, my wife included, said, “Wow. I just saw the future. That’s the future.” You don’t even really know what that means. How do you make a business out of something that we all agree is very cool, but what is the value to that? Is it entertainment? Is it productivity? That is why you still see Google, Microsoft, Apple and these other big tech players still just dipping their toe into virtual reality and augmented reality. There’s not really no money to be made there, but also there’s still doubt that it’s ever going to be the future.

“The History of the Future” is also a detailed story about the controversial Oculus founder Palmer Luckey, who got himself embroiled in the politics of the 2016 presidential election. He was also sued for half a billion dollars for intellectual property theft related to the creation of his Oculus headsets.

Luckey now has a new company that develops virtual reality and artificial intelligence tech, and it reportedly just got a big contract from the Pentagon to work on that tech as part of the government’s Project Maven. Project Maven is the only sort of secret initiative to develop better artificial intelligence and image recognition for military drones. It is also the project that famously caused such outcry among Google employees that the company canceled its Pentagon contract to develop military tech.

Luckey’s new company has funding, support and former employees from Peter Thiel’s Founders Fund and the data analytics company Palantir. And Palantir is a big provider of tech to the Defense Department and police agencies.