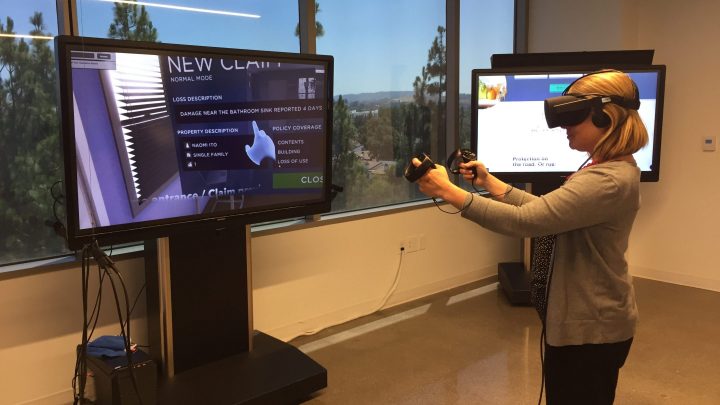 When the first modern virtual reality headsets came to market a few years back, it felt like we were on the cusp of the sci-fi future. But stand-alone VR headsets like the Oculus Quest are still pretty expensive, and there’s not that much content available for them. While home use of VR hasn’t gone mainstream, makers of the technology are increasingly aiming the product at businesses to use for training their employees.

A report from tech industry advisory firm ABI Research predicts the market for workplace VR will explode from just over $200 million in 2018 to more than $6 billion by 2022.

Walmart has been using virtual reality training to prepare thousands of store employees for Black Friday the last couple years and more recently to assess workers for possible management roles. Tyson Foods conducts safety training for warehouse workers in virtual worlds, and Farmers Insurance uses the technology to train hundreds of claims adjusters before they go into a home looking for damage.

“It increases their confidence,” said Jessica DeCanio, head of claims training at Farmers Insurance. “And the more confident our claims reps are, the better customer experience that they can provide.”

Farmers’ program was created by a startup called Talespin, which is now working on training to improve soft skills — those involving emotional intelligence — by developing artificially intelligent virtual humans to interact with. In a demonstration, CEO Kyle Jackson showed me the company’s latest module, which involves running through a series of variable dialogues with a worker named Barry in order to fire him in the most graceful way possible.

The hyper-realistic graphics were certainly impressive, but once you get past the wow factor, is virtual reality really any more effective than just watching a PowerPoint presentation or role playing with colleagues? Psychologist Skip Rizzo at the University of Southern California is convinced it is.

“There’s nothing magic about it,” he said. “It’s really just a tool, but a very emotionally evocative tool.”

Rizzo has studied therapeutic applications of VR for treating soldiers with post-traumatic stress disorder and patients with severe phobias. He said the immersive nature of the technology not only grabs people’s attention, it affects their brains.

“At some level, people know that we’re not really in this place,” he said. “But the area that drives emotion — the fight or flight area of the brain — that area just responds to the perception.”

That’s why despite knowing full well that I was speaking to a computer graphic when I strapped on a headset to give firing Barry a try, I couldn’t help but get a bit flustered when he erupted in what felt like very real anger. By the second time around, I’d learned to be a bit more tactful.