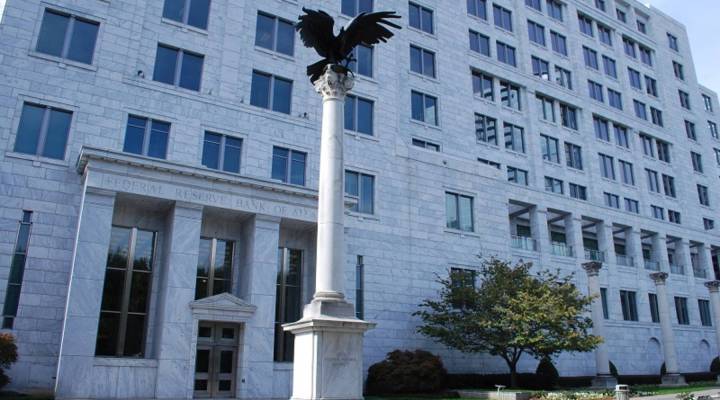 COPY
The Federal Reserve Bank of Atlanta, where the current president is planning to retire next year. Some activists and lawmakers are calling for more diversity in the central banking system's leadership. Stephannie Stokes

The Federal Reserve Bank of Atlanta, where the current president is planning to retire next year. Some activists and lawmakers are calling for more diversity in the central banking system's leadership. Stephannie Stokes
Listen Now

The Federal Reserve has been criticized recently for its lack of diversity.

Only three African-Americans have served on the Fed’s board of governors. And there has never been a black president of a regional Federal Reserve Bank.

But now that the regional bank president in Atlanta is stepping down, several congressional lawmakers and activists are calling on the Fed to change.

“The Fed is the nerve center of our entire economic system, and nobody is suffering from an economic depression as the African-American community,”  Scott said.

Despite improvements in the overall unemployment rate, black workers still struggle, Scott said. The jobless rate for African-Americans, for example, is double the rate for whites.

People like Formosa Williams, outside an Atlanta unemployment office. For years, Williams said she has struggled to find stable work.

“At this point, I don’t know what to do,” Williams said.

“The only jobs that really seem to be hiring are like fast food,” Williams said. “And it’s no way I’m gonna go back to that.”

Scott and the activists hope stories of minority workers, like Williams, will take a more prominent place in the central banking system’s discussions if it has a regional president who is a person of color.

“Unless you have a voice at that table that has gone through the experience of being an African American, you’re missing so much,” said Scott.

The congressman and activists argue the appointment also makes sense, given the region the bank covers — the South — and that region’s history of civil rights.

But while many economists might agree that diversity is good, they aren’t all sure how it translates into policy.

“I think you have to start out with the recognition that our Federal Reserve officials have really one tool, and that’s interest rates,” said Tim Duy, an economics professor at the University of Oregon. “That tool is a very blunt instrument.”

That tool affects the broader economy at a macro-level, said Duy, who also authors a blog called Fed Watch. Meanwhile, he said, many of the problems facing African-American workers are at the micro-economic level.

“The Federal Reserve is not going to be a silver bullet to these issues,” Duy said.

The search for the next Atlanta Fed president is being led by a committee of business leaders from around the South.

They say they’re looking for the best person, and they’ll seek out a diverse pool of candidates.