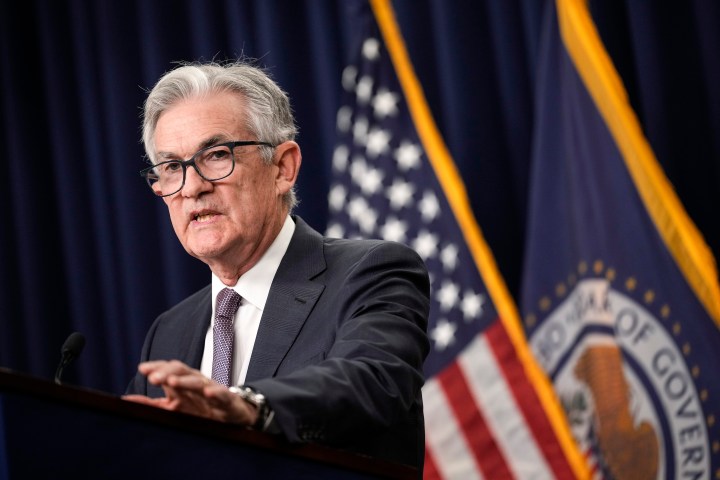 If you pull a dollar bill out of your wallet, you’ll see a black circle with a letter in it. That letter tells you which of the Federal Reserve’s 12 regional banks distributed that dollar.

The presidents of those regional banks rotate through the Fed’s Federal Open Market Committee to give all 12 a say on interest rate policy. Wednesday, five of them voted to raise interest rates by three-quarters of a percentage point, or 0.75%.

But when you look at a map of what parts of the country the banks represent, things don’t seem all that evenly divided. The eastern half of the U.S. is segmented into eight districts, while the western half gets four. New York pretty much gets its own, while on the West Coast, one district covers every state west of Colorado, including Alaska and Hawaii.

The reason the Fed’s district map looks so uneven goes back to 1913, the year the Federal Reserve System was created.

Back then, the people who did the creating agreed on one thing: The country needed multiple Federal Reserve banks.

“Everyone figured if you created one bank, it would get controlled by New York bankers,” said Gary Richardson, a professor of economics at the University of California, Irvine. Between 2012 and 2016, Richardson served as the Fed’s first historian.

Richardson said people didn’t think New York bankers would consider their regional interests when setting interest rates. For instance, farmers in the Midwest often had big mortgages and seasonal incomes. And people in the South wanted to maintain the American version of apartheid.

“In the South, there was a lot of concern because the control of money and finance was an important way that the local white elites maintained control over the poor whites and the African Americans,” Richardson said.

So a committee came together and divided the country up into 12 districts. Richardson said the idea was to loosely reflect the regional economies of the time. Big financial hubs, like New York and Chicago, got banks. Cleveland got one to handle the economy of the Great Lakes region. The West Coast, which was sparsely populated at the time, was given a bank in San Francisco.

“You know, Richmond [Virginia], they can be the specialist in tobacco and financing the tobacco industry,” Richardson said. “St. Louis — ‘We need a bank that has expertise in funding the inland waterborne trade of the U.S.’”

All 12 banks were independent, so they could set their own interest rates. That was great if you wanted a central bank that could set policy based on tobacco seasons, for instance. Not so great if you need those banks to work together to stop the entire economy from collapsing.

“Some economists have basically blamed the Great Depression on the fact that these regional banks had a lot of power,” said Sarah Binder, a professor at George Washington University and a senior fellow at the Brookings Institution.

In the early 1930s, Congress redesigned the Federal Reserve and created the Federal Open Market Committee, or FOMC, to set interest rates for the whole country. Binder said that made the Fed look a lot like it does today.

“We still have reserve banks, they still vote on monetary policy, but the system is far more centralized than it was back in 1913,” Binder said.

But the Fed’s district map hasn’t really changed, even though the economy has.

Populations and industries have moved around. “Look at North Carolina,” Binder said. “Like, Charlotte — major financial center for the South and mid-Atlantic and Southeast. But Charlotte doesn’t have a reserve bank. Richmond has one. But there really aren’t very many big banks in Richmond.”

Binder said the Fed’s district boundaries are unlikely to change anytime soon. For one thing, Congress would have to do it.

She added that the regional banks have tried to make themselves indispensable by specializing.

It might not matter that the Fed’s district map is so outdated. The U.S. economy is a lot more integrated than it was in 1913. For instance, a farmer in Wyoming might borrow from a lender in Atlanta.

Yet the regional banks do play a vital role in the Fed’s messaging, Mishkin said.

“When the Fed’s doing tough stuff, like it is right now in raising rates, the district banks are very important in terms of generating support for the system,” Mishkin said. “They can talk to major players in their district to make sure they can understand why the Fed is doing what it’s doing.”

And like in 1913, Mishkin said, it’s still important to have people outside the Washington-New York bubble making interest rate decisions for the country.