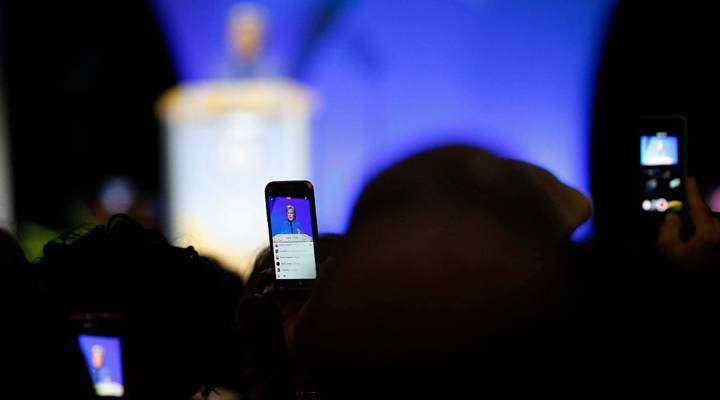 The presidential campaigns will be spending the weekend preparing for Monday’s presidential debate. The candidates are readying their one liners and prepared rebuttals, and their ad teams are developing strategies to capitalize on what’s expected to be a record audience watching on TV, and following online.

This debate could have one of the largest audiences ever in a presidential race, with some estimating up to 100 million people will watch on Monday night. Many of them tweeting and posting and chatting online at the same time, providing the kind of advertising opportunity companies — and campaigns — dream about.

Jenna Golden is head of political ad sales at Twitter, and said her team is telling the campaigns to budget big — at least six figures — for Twitter ads on debate night.

“We know in 2012 there were 46 million viewers on TV and there were over ten million tweets sent during that first debate,” she said. “We’re expecting that to be astronomical compared to what it was four years ago.”

Golden said campaigns are using Twitter’s advertising tools to target potential voters by demographic categories like geography and gender, as well as Twitter-specific criteria like who a user is following or what hashtags they use.

“You might see one ad tweaked in fifteen different ways and then set up across seventeen different campaigns,” Golden said, “because they each might be targeted to different states or at the same they might slightly tweak the language so that it looks a little different for one group versus another.”

Campaigns can make those tweaks because they know a lot about what potential voters do online. That’s thanks to people like Bryan Gernert, CEO of Resonate, a data tracking company. He said there’s about 50 times as much information available about the online activity of potential voters compared to the last presidential election.

“We observe huge volume of online behavior data such as, which websites people go to, what type of content they’re reading across 15 billion different data points in a day,” Gernert said. “And from that, it gives us insight into… what issues and causes people are most concerned about.”

That insight can include what might get voters to swing towards one candidate or another. Voters like 21 year-old Spencer Claiborne of Kansas City, Missouri. He’s been involved in politics since he was 12, volunteering for the Obama campaign in 2008, then switching to support Republican Mitt Romney in 2012.

This will be his first election voting, and he was leaning towards Republican candidates, but then kept seeing this ad on YouTube:

Claiborne said this ad is typical of what’s popping up when he’s online.

“Political ads that are targeted at me tend to be now from Democratic candidates trying to appeal to the sensibility side of Republican voters,” he said. In the case of this particular ad, for Jason Kander, a Missouri Democrat running for Senate, Claiborne said the ad targeting actually worked. And he has mixed feelings about that.

“The fact that companies know such specific data about me and about what could change my opinions scares me, but at the same time, I’m happy that this ad… because it helped me make my decision.

The targeting worked so well, in fact, Claiborne said he’s decided to volunteer for the campaign.