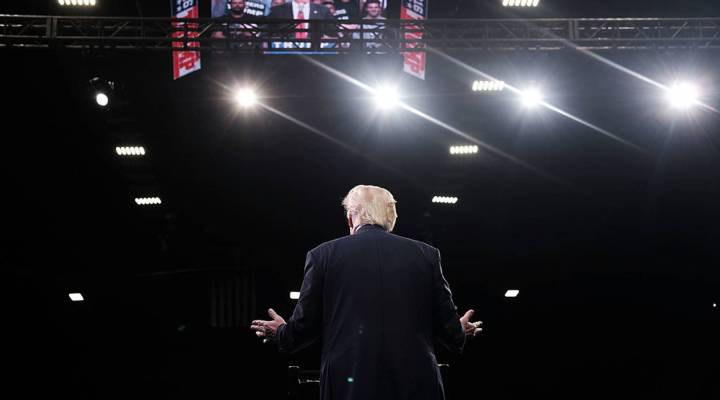 Presumptive Republican presidential candidate Donald Trump speaks at a rally on Friday. Trump has once again posed the question of why networks don't pay him to do their televised debates. Spencer Platt/Getty Images

Presumptive Republican presidential candidate Donald Trump speaks at a rally on Friday. Trump has once again posed the question of why networks don't pay him to do their televised debates. Spencer Platt/Getty Images

Trump spurred a slew of headlines this week with his claim that he would debate Democratic candidate Bernie Sanders, for a price. Trump’s mentioned this idea before — he thinks television networks should give him money for bringing in historic ratings and increasing the value of their advertising. Trump said it’s not for profit, though. He said he would donate any money he’d make from  a debate with Sanders to a “worthy charity.”

Even if he doesn’t keep the money, is it OK for Trump to ask for money to do something most people see as one of the most common, and perhaps crucial, ways of freely disseminating candidate platforms to the masses?

Some experts say it’s not only OK, it makes perfect sense, given the business of American elections.

“This is not a bizarre idea on the face of it,” said Kathleen Hall Jamieson, the director of the Annenberg Public Policy Center at the University of Pennsylvania. “When they’re not running for public office, politicians do give speeches for money. When they are running for office, it’s a fundraiser — you get some hors d’oeuvres, you pay a lot of money, you hear the candidate speak.”

Sanders readily agreed to debate Trump, and some networks said they were interested in hosting such a debate even after hearing Trump’s demand for money, but it’s not clear if the idea will come to fruition (UPDATE: Trump released a statement Friday saying he won’t debate Sanders after all). And while it might seem to be a strange proposition that a network should pay candidates to speak, the modern televised primary debates have indisputably become a money-maker for those networks.

It’s a common belief that debates are some sort of democratic tool, or a requirement of election regulations meant to hold candidates accountable, said Barry Burden, director of the Elections Research Center at the University of Wisconsin-Madison.  But, he said, debates are not required during an election.

“It was never an expectation,” Burden said. “We think that debates go back to the beginning of time, but no.”

“There’s millions of dollars being pumped in by a small number of corporations,” Burden said. “There’s no spending limits.”

Having private groups behind debates “becomes an issue when you try to determine who belongs in these debates and who should be kept out,” he added.

The Libertarian and Green parties made that argument in their lawsuit against the Commission on Presidential Debates, the nonprofit in charge of putting on presidential debates. The political parties have said the commission’s candidate requirements are “arbitrary” and “unfair.”

This kind of conflict also happens with primary debates. The TV networks can choose what metrics they want to use to determine if a candidate should be included in a debate. And, while networks don’t sell ads for presidential debates — even losing money in some cases — they run advertising freely during primary debates, Jamieson said.

This year’s Republican primary debates generated more buzz than previous years, and networks were pulling in hundreds of millions of dollars, charging six figure prices for 30-second spots. The primary debates on Fox were breaking viewership records early on thanks to the drama of the GOP. While this does speak to Trump’s contribution as a wild card candidate who will say just about anything, Burden said it also speaks to how election campaigns have changed from purely political movements into revenue generators.

Campaign buttons are for sale before a campaign rally for Democratic Party presidential candidate Bernie Sanders in February. Political campaigns used to give away merchandise, like these buttons, for free, but now they are often sold for profit.

Consider the evolution of campaign schwag like t-shirts, hats and buttons. This merchandise was once given away for free, used solely for marketing to voters. Now, campaigns sell merchandise online as a way to finance their work.

Jamieson said this might be the new normal. Just like how companies now sponsor sports arenas, blatant company branding may soon pop up in debates.

“Nobody would have ever expected that a public space would have been branded before. An arena would have been named a person, not a bank,” she said. “Trump may be a harbinger of change. This may be a sign of commercial culture reaching politics in unexpected way.”